The Czech Republic’s footballers have been packing their bags after a hugely disappointing European Championship in France. Pavel Vrba’s men exited the competition on Tuesday night following a 2:0 defeat to Turkey that left them with just one point from three group games. Where did it all go wrong for the Czechs at the Euros? And what does the future hold for the team’s manager? I put those questions to soccer journalist Michal Petrák on the line from France. 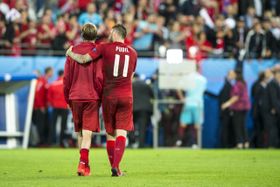 Jaroslav Plašil, Daniel Pudil, photo: CTK “Generally speaking, I think the team, the players, approached the games with a lack of confidence. That was their biggest problem, I think.

“Certainly the squad isn’t world class. There aren’t many players who play in top clubs, except for Tomáš Rosický and Petr Čech.

“But I think they just approached the games against Spain and Croatia with the mind-set that they are players from Real Madrid, from Barcelona, and they are almost unplayable.

“I think this was the biggest problem – they lacked confidence. And they haven’t really shown what their potential is.

“If you compare it to the qualifying stage, to the games against the Netherlands for example, they haven’t really reached their potential.”

How much does the manager Pavel Vrba bear responsibility for those problems you’re talking about? Wasn’t it up to him to instil some confidence in the team, and give them better tactics perhaps?

“I think he takes a big part of the blame for setting this mentality in the team, for instilling these thoughts, like the players they are facing are too good or that they are very difficult to play against. Pavel Vrba, photo: CTK “I was really close to the team. I was at the training sessions and I saw the games. And I just didn’t see courage in the playing style or in the players. This is what the manager has to instil in them: courage.”

But doesn’t the argument that players from Spain and Croatia are simply better fall down when you consider that they were playing Turkey? If they had won against Turkey last night, they would still have a chance of qualifying.

“They would tell you that even the players from Turkey are better, which they possibly are.

“But they should have won yesterday against Turkey. They started well. They had some chances, but they didn’t convert them.

“And as time went on and as they conceded… which also is a big problem – they have conceded in all 25 games under Vrba except one.

“That’s a big problem, too – that Vrba hasn’t really coped with the porousness of his defence.”

Do you think Vrba should go?

“He himself was a novice at this level, at the Euros, and I think he just hasn’t been able to prepare himself and prepare the team for the tournament. 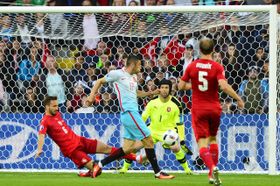 Burak Yilmaz scores, photo: CTK “But the fact he is a good coach is permanent. He hasn’t lost his quality overnight. The year in Czech sport

2016 was a mixed year for Czech sport. There was quite a lot to celebrate, with the country bringing home 10 medals from the Rio Olympics,… 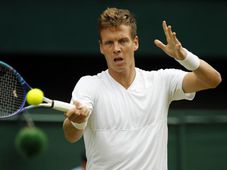 In Sports News this Monday: Veselý and Berdych to square off in Wimbledon fourth round; meanwhile, Lucie Šafářová is last Czech remaining… 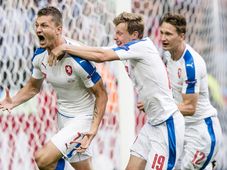 In Sports News this Monday: Czechs comeback to secure point against Croatia at Euro 2016; injured Rosický likely to have appeared in…