The long wait will be over for Czech football fans on Saturday, when after a two-and-a-half month break the Gambrinus Liga – the top tier of Czech soccer – kicks off once again. Can Slavia Prague defend the title they won so dramatically in May, or will fierce rivals Sparta return to their usual dominance? Who are the players to watch out for this season? And what’s the story with the two clubs called Bohemians? 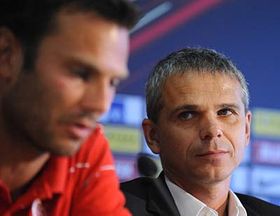 Patrik Berger and Vítězslav Lavička, photo: CTK The 2007-2008 season was one of the greatest in the history of Slavia Prague. After reaching the Champions League for the first time, they went on to open their long-awaited new stadium at Eden in May. Incredibly, they lifted the Czech league title for the first time in 12 years after their first competitive game at their ultra-modern new home.

That became possible after Sparta Prague – who had been in front – fell to pieces at the end of the season. Now led by manager Vítězslav Lavička, Sparta will be hoping to reassert their usual dominance this term. The country’s richest club have won the Czech league ten times since the old Czechoslovak league split at the end of the 1992-93 season.

Many were surprised when Sparta signed Patrik Berger, a former Slavia midfielder who played for Borussia Dortmund and three English Premiership clubs in 13 years abroad. He had been expected to rejoin his close friend Vladimír Šmicer at Slavia, but ended up agreeing terms with Sparta, where he played as a junior. Berger will no doubt be the biggest draw for Czech fans this season, provided he can stay free of injury. 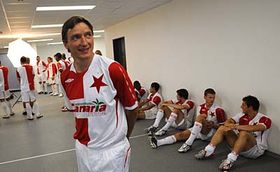 Vladimír Šmicer, photo: CTK Vladimír Šmicer – perhaps the most popular man in Czech football – says he plans to play for Slavia again once he recovers from the latest in a long series of injuries, injuries which meant he played almost no part in the club’s success last season. But Slavia coach Karel Jarolím seems to think differently: he told reporters he does not expect Šmicer to return.

Elsewhere, a player to watch should be Baník Ostrava’s Václav Svěrkoš, who was the league’s top scorer last season. The 24-year-old raised his profile considerably after scoring for the Czech Republic in their opening game at Euro 2008. Former Baník striker Michal Papadopulos is now at Mladá Boleslav after a stint in the Bundesliga, with the central Bohemian club also investing in Frenchman Ludovic Sylvestre, formerly of Sparta. Bohemians, photo: CTK One curious aspect of the Gambrinus League concerns the two clubs operating under the name Bohemians. When FC Bohemians Praha went bust in 2005, the club was brought back to life by its fans, who organised a collection. However, the name had been bought by another club, so the revived Bohemians took the name Bohemians 1905, after the date of its foundation.

Last season Bohemians 1905 – who still play at traditional home Dolíček and have one of the biggest fan-bases in the country – were relegated from the top flight. By coincidence, one of the two clubs promoted were FC Bohemians Praha, who also wear green and white. So the “fake” Bohemians are now in the top division, while the “real” Kangaroos are in the second flight.