The Czech Foreign Minister Lubomír Zaorálek as well as key public figures such as the Academy of Sciences’ Pavel Baran or sociologist Tereza Stöckelová presented a new project on Thursday entitled “Česko na cestě”, marking key dates in the country’s history next year. It will be 100 years, for example, since the founding of Czechoslovakia and 50 since the Soviet-led invasion in 1968. The aim is to discuss key moments that changed the country, in good times and bad. 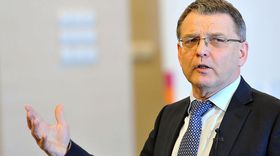 Lubomír Zaorálek, photo: Filip Jandourek Any Czech will tell you that the number “8” has long been significant in the history of the Czech Republic, from the founding of Czechoslovakia in 1918 to the Munich Agreement in 1938 which carved off the Sudetenland paving the way for occupation by Nazi Germany a year later, 1948, which saw the Communists take power, 1968 when Soviet tanks rolled in. 1989, the fall of communism, was the exception, as was 1993 – when the Czechs and Slovaks went through the Velvet Divorce. At Nagano ’98 the Czechs won the gold medal in hockey at the Winter Olympic Games and since then eights have been somewhat tamer, well, maybe not, there was the global economic crisis. Next year, 2018, will obviously be significant and a big opportunity to show how far the Czech Republic has come. Foreign Minister Lubomír Zaorálek:

“We contacted a many intellectuals, writers, journalists and others from all kinds of fields because of the many significant anniversaries coming up. One hundred years since the founding, 50 since the Prague Spring and 25 since the country was divided into the Czech Republic and Slovakia.

“As you know we have agreed with Slovakia to mark the date together… We are getting a lot of people involved because we think there will be a lot to discuss and that there should be a public debate.”

According to the foreign minister, it would be a shame for the public and presumably also institutions to only take a brief note of the anniversaries next year before moving on. Getting all manner of experts involved will mean that key periods are discussed in greater depth and from different angles. The minister again: 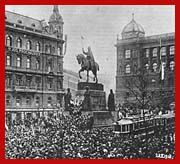 Wenceslas Square, October 28, 1918 “It is an opportunity for us to do more than remember. We can also use the moment to think about what we want in the future. I am certain we are living at a time when it will be decided what Europe will be like and maybe also the Czech Republic’s place within it.”

Michal Pullman added that as a historian he felt it was especially important not to sugar-coat the facts but to shine a hard light on key moments, some of them less than flattering.

“For me as a historian it is very important that this project will not be only about one view or interpretation of key moments in our history, but also a critical reflection on where there were failures. If we want to be able to gauge those moments, a critical approach is needed.”