They fought against the Nazis but were treated as enemies in Czechoslovakia after the war: that is the starting point for “Forgotten Heroes” a travelling exhibition in the Czech Republic mapping the story of ethnic Sudeten Germans who fought against the Nazis. Despite their resistance to Hitler in World War II, many still suffered persecution in Czechoslovakia after the end of the war. 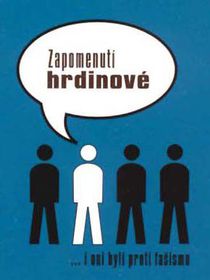 “Forgotten Heroes” is the work of several institutions, including the Institute of Contemporary History and the National Archive, aimed at mapping the stories of Sudeten Germans who fought against the Nazis during the war. After the conflict ended, many, despite their contributions, were lumped together with the tens of thousands of ethnic Germans who had openly backed Hitler’s Germany. They were persecuted, even murdered after May 1945, by self-appointed avengers in a period followed by the “divoky odsun” or forced deportation, which affected 2.5 million Germans. It was with great difficulty that a relatively small number - around 130-150 thousand – were able to remain, securing the official status of “antifascist”. Vaclav Houfek is from the Usti nad Labem City Museum in north Bohemia:

“The status ‘antifascist’ was given to those after the war who were able to prove their contribution, a time when the state administration was in upheaval. On that basis they were given state citizenship. It wasn’t easy: they had to provide witnesses and concrete proof of resistance to the fascists. Their native tongue was German but administrators carried out all proceedings in Czech.”

In Vaclav Houfek’s view, the number of Czech Germans who opposed the Nazis was far higher than ultimately proven. Nor was the status of “antifascist” in future Czechoslovakia enough to prevent persecution: one of those who remembers the period is Bedrich Dedek, whose father was ethnic German. Mr Dedek was at the opening of “Forgotten Heroes” and he told Radio Prague his story: how he and his father had prevented the destruction of locks on the Labe River. The retreating German army had planned to flood hundreds in nearby surroundings but Mr Dedek’s father stalled the soldiers, persuading them not to act. Meanwhile, the 11-year old son secretly ran for wire clippers and then cut the wires leading to the explosives. Bedrich Dedek:

Bedrich Dedek “I didn’t see it as more than a boyish act at first – I was only 11! But my father sent me! When I thought about it later I realised the whole thing had been quite dangerous. I realised I might not have been able to cut the wires in time and they could have blown me - and the floodgates - sky high.”