After a pause of ten years, the Forman brothers have returned to Prague with a new show called Deadtown, inspired by the Wild West. The Belgian minister of culture hailed the performance, saying it was better than anything she had seen at the Cannes film festival this year. With the Czech premiere of Deadtown the Forman brothers have also launched their new festival called Arena, which will run at Prague’s Smíchov embankment until Sunday. 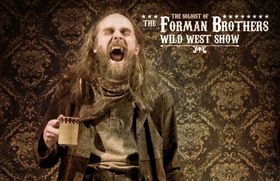 'Deadtown', photo: archive of Forman brothers’ theatre After a series of performances in France and Belgium, the Forman brothers have arrived in Prague with a new theatre performance called Deadtown. Their Loď Tajemství or Mystery Boat, an 84-metre long barge turned into a theatre stage, has already been docked at the Vltava embankment in Prague. But the new show actually takes place at a brand new space built at the Smíchov embankment.

In an interview for Czech Radio, Petr Forman explained how they came up with the title for the new festival:

“When we found this space, where we eventually built our wooden ‘saloon,’ we discovered that a similar theatre used to stand here in the past. It was called Arena, and among those who performed here was the legendary actor Vlasta Burian. So we immediately knew how to call our new festival.”

The Arena festival was launched on Wednesday by the Czech premiere of the new Forman brothers’ show, called Deadtown. The image of Wild West presented by the Forman brothers has been inspired by old black and white photographs as well as silent western films and slapstick comedies, also making use of film animation, live and recorded music. The play is set in the Wild West during the time of the gold rush, but also in Prague at the beginning of the 20th century. Petr Forman again:

“The performance takes place sometimes around the year 1900, in the era of great discoveries, such as phonographs, cameras and first films. They are discoveries which don’t cease to fascinate us even today. And all these things, those little details, they are an honour to the great men who laid the basis of the world we are living in today.” 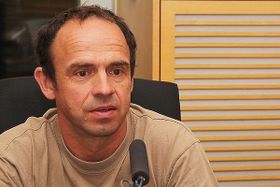 Petr Forman, photo: Alžběta Švarcová The Arena festival will offer a series of performances by the Forman brothers’ theatre. Apart from Deadtown, you can also see Aladdin, a family performance inspired by the ‘Thousand and One Night’ stories and a children’s show YURI, the astronaut.

There will also be a number of concerts taking place both at the Smíchov embankment and on the boat, as well as a dance hall and various workshops for kids.

The festival Arena will run until Sunday evening, but the Forman brothers’ theatre will continue to perform their new show Deadtown at the Vltava embankment until the end of June. 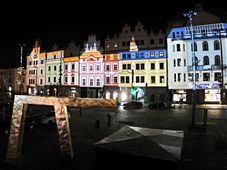 This Saturday, Pilsen will officially become 2015 European City of Culture. The project will kick off with a grand opening ceremony,… 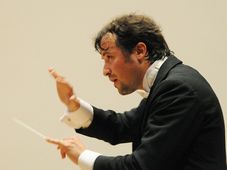 Marko Ivanović: opera has always been a multimedia genre

Opera performances are generally not crowd pullers, but the new opera Enchantia, which premiered in January 2012 at the Prague National… 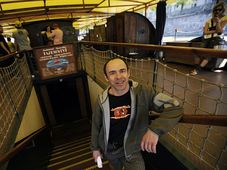 It is hard to believe that it has been ten years since the Forman brothers’ Loď Tajemství (Mystery Boat), an avant garde theatre with performances…