French President Francois Hollande met with Prime Minister Bohuslav Sobotka and President Miloš Zeman during a one-day visit to the Czech Republic on Wednesday. Twice before Hollande has had to cancel visits to the country after terrorist incidents back home, and not surprisingly security and European unity topped the agenda of the talks. 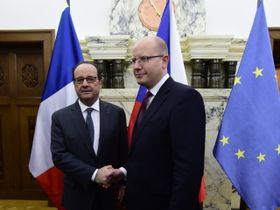 Francois Hollande, Bohuslav Sobotka, photo: CTK The French president was received with military honours at Prague Castle on Wednesday, where he and President Miloš Zeman discussed European security, the migrant crisis and the state of bilateral relations. The top-level talks then continued at Prime Minister Sobotka’s residence in Kramář villa, where security concerns were once again at the centre of attention. After the talks, the Czech prime minister stressed the need for greater solidarity across the EU in tackling security issues:

“I am very glad that we were in agreement on the need to use all possible resources to strengthen the external borders of Europe, and that a joint effort is needed in the battle against terrorism. We also spoke about cooperation within the EU framework. The Czech Republic is against digging proverbial ditches creating chasms between individual parts of the European Union. And we certainly welcome increased dialogue between V4 countries as well as countries such as France.”

Meanwhile Francois Hollande thanked the Czech Republic for its assistance in battling terrorism and also for sending forces to Mali, which has been battling Islamist militants. The number of Czech forces was increased last year after French troops were sent instead to fight Islamic State in Syria. Hollande also emphasized the need to foster greater unity within the EU: 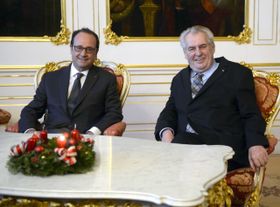 Francois Hollande, Miloš Zeman, photo: CTK “The Czech Republic is part of the Visegrad Group. Meanwhile France is a founding member of the European Union. We cannot divide ourselves into geographic regions. Sometimes we can have different views, but we are all in one boat and our jobs are to jointly battle for a common vision of Europe.”

The Czech side also brought up wage level disparities, which have been souring bilateral relations. Prime Minister Sobotka called on companies investing in the Czech Republic to increase wages, which, he argued, would improve both living standards and foster unity across Europe.

The Czech Republic and France have recently been at odds over French moves to impose their minimum wage levels on Czech truckers passing through the country with stiff fines on those who break the rules. Prague and Paris have now decided to pass on the problem to their respective ministries. 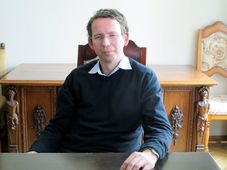 Czech ambassador to Paris: Asking for reform is a testimony of European commitment

Czech ambassadors from around the world congregated in Prague this week for their annual round of consultations. Among the foreign… 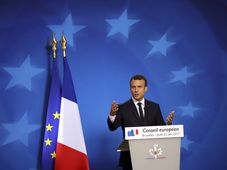 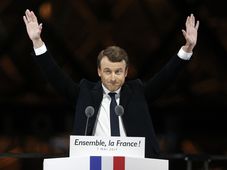 Czech politicians have for the most part welcomed the victory of Emmaneul Macron in France’s presidential election run-off on Sunday,…