Prime Minister Andrej Babiš’s recent tweet reinvigorated the discussion about creating a special Prague district for government officials, which he believes would create synergy and save the state money on rent. The prime minister’s vision is likely to run into obstacles however, as the future mayor of the capital, Zdeněk Hřib, says he is against creating mono-thematic districts. 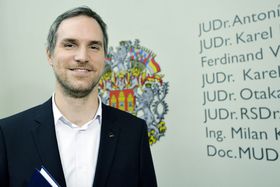 Zdeněk Hřib, photo: ČTK/Michaela Říhová A special precinct on the outskirts of Prague made up of modern office buildings filled with government officials working in synergy. That is the vision of Czech Prime Minister Andrej Babiš, who says he was inspired by Paris’ ministerial skyscraper project.

He first made his idea public in December 2016, when he suggested moving bureaucrats to an office complex in Letňany. After becoming prime minister a year later, Mr. Babiš proposed the area of Bubny-Zátory around Prague 7’s Holešovice quarter.

Many of his ministers supported the idea, listing administrative efficiency and opening up the currently occupied buildings to the public as further reasons for the move.

At the time, the man responsible for the areas under consideration, Prague 7 mayor Jan Čižinský, spoke out against the proposal. He said that the current historic ministerial palaces, most of which are located in Prague 1’s Malá Strana, serve their purpose well.

“In my opinion these buildings have to stay this way. To clear them out would turn the centre into an even greater ghost town. To then build another ghost town, which is empty of people after four or five in the afternoon, would be a mistake.”

Tweeting on Sunday evening, Mr. Babiš let it be known that he still has hopes for his vision becoming a reality. He expressed satisfaction with the Culture Ministry’s decision to rule against the auctioning of Chateau Veleslavín, which he wants to trade for real estate for a the new government district.

This is unlikely to move so smoothly however. Reacting to Mr. Babiš’s Tweet on Monday, Prague’s future Mayor Zdeněk Hřib said he was against creating single purpose districts. Veleslavín Chateau, photo: Miloš Turek “We want to get the Veleslavín Chateau ideally through a free transfer or via an exchange for another property. However, I am not a proponent of the creation of mono-thematic districts for government officials. I do not think it is a good idea.”

Kateřina Zelingerová is from the Prague Institute of Planning and Development, an organisation that was given the responsibility to come up with a plan for the Bubny-Zátory area earlier in 2018. She says that while the government district idea has its advantages in terms of accessibility and state costs reduction, it should also include normal residential areas.

“We believe that the new district should be mixed. Not just governmental buildings but also residential buildings and administration. Such a mix would never create a ghost town.“

According to media reports the civil servants who occupy the historical buildings in the city centre are not keen to move to the outskirts.