This summer's football World Cup was a big disappointment for the Czech Republic, who were knocked out in the group stage. But the World Cup is already history, and the Czech team are now preparing for the qualifiers for the 2008 European Championships; their opening game is against Wales at home on Saturday, while next Wednesday they play former compatriots Slovakia in Bratislava. I discussed those games and more with goalkeeper Petr Cech. 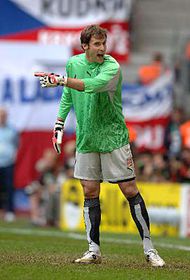 Petr Cech, photo: CTK Immediately after the World Cup Petr Cech had operations on both shoulders, but his recovery has been fast and on Sunday he starred for Chelsea in his first game back. I spoke to the star goalkeeper ahead of the Euro qualifiers, and asked him how important it was to have at least one club game under his belt.

"Of course it was important for me, and I'm happy that I could play 90 minutes. Nothing wrong happened with my shoulders, so I feel comfortable before the national team's games."

The last game was (a friendly) against Serbia, the Czechs lost 3:1 and it was a poor performance. What do you think it went wrong in that game, if you saw it?

"Yeah, I saw the game. I think that the first half was not too bad, we went 1:0 up and after that I think we were missing a little bit of concentration. I think we cannot forget the fact that Pavel Nedved played the last game of his international career and I think everyone was concerned...so I think that was the lack of concentration in the second half, and that's why we lost."

The next two games you have of course are European Championships qualifiers. The first game is against Wales on Saturday - what kind of game are you expecting against Wales? Would you say they'll be quite physical opponents?

"Yes, I think it'll be an English style of game and they have a few quality players in the squad, players playing in the Premiership or the Coca-Cola Championship, with experience. I saw them in their last game against Bulgaria and they made a brilliant performance, with a lot of chances. Even though the game finished 0:0 it was a great performance by them. So I think it will be tough, a tough test for us, but we need three points and that's what we want to do."

Next week you have a very interesting trip to Bratislava - were you too young to ever play for any Czechoslovak youth teams?

"I've never played for Czechoslovakia. I started my international career at under 15, already as a Czech Republic player."

For you do you think it'll have something extra compared to playing another country?

"I think it will be a little bit extra for everyone, because we've played only one game against them, four years ago, when we won a friendly game 4:1. But I think things have changed a lot. I think they've got a better team now and they will be a much harder opponent than before. And of course it's going to be the first time we play a competitive game against each other, and I think the atmosphere will be special, because everyone wants to beat Slovakia, the Slovaks want to beat us and it'll be tough."

After the World Cup, which was a bit disappointing for the Czech Republic, how important do you think it is now to immediately get off to a good, fresh, new start?

"It's always important, and I think it's even more important now because [Karel] Poborsky and Nedved finished, and we'll have a few changes in the squad. Every start is important and we want to forget quickly the World Cup and start a new era. And we want to make sure that we start well."