The Czech government will make a fresh effort to fight smoking and alcoholism, both of which have long been a serious problem in the country. After several failed attempts, the Health Ministry plans to introduce a general smoking ban in public spaces. In addition, the ministry will also push for a move that would oblige restaurants, bars and pubs to offer at least one non-alcoholic beverage at a lower price than the cheapest alcoholic drink. 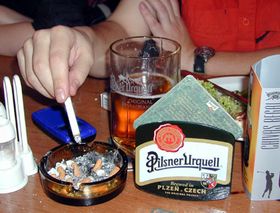 Photo: archive of ČRo 7 - Radio Prague Czechs top international statistics in beer consumption. Half a litre of the popular beverage rarely costs more than 40 crowns, or two US dollars, in any pub and is often cheaper than any other drinks on offer.

The Czech government is now seeking to change that. An amendment to Czech legislation aimed at combating smoking, alcoholism and other addictions should oblige the owners of all restaurants, pubs and bars to offer at least one non-alcoholic beverage at a lower price than the cheapest alcohol. Ferdinand Polák is a deputy health minister.

“It’s very common, and many of us have experienced it, that when you want to have something to drink, you find that half a litre of beer is cheaper than a smaller glass of the cheapest non-alcoholic drink. That’s quite common in many restaurants and bars, and I consider it unsound.” 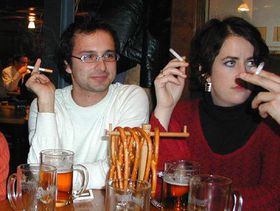 Photo: archive of ČRo 7 - Radio Prague The idea of forcing establishments to offer a cheap non-alcoholic choice has raised the eyebrows of many in the business. Some restaurant owners say people will get a beer even it is a few crowns more expensive than a glass of water, others complain they will have to deal with yet another government regulation. Kateřina McCreary is co-owner of a popular Prague establishment, Café Sladkovský.

“I think it’s hypocritical. Most places – maybe with the exception of tourist bars in the centre – have non-alcoholic drinks that are cheaper than alcoholic drinks including beer. I think that alcoholism in this country is a real issue but I don’t think it can be dealt with in this way. This is just shifting the responsibility on pub owners.”

If approved by lawmakers, the draft legislation could come into effect in the middle of next year. It would also increase fines for selling alcohol and cigarettes to minors, and also includes another attempt to introduce a general smoking ban in all public spaces including restaurants, bars and pubs.

Several previous efforts have failed, mainly due to intense lobbying by tobacco firms among MPs; in 2008, the lower house passed a watered-down restriction which allows smoking in separate sections of the establishments. This time, however, the proponents of the ban are optimistic. Civic Democrat MP Boris Šťastný is a dedicated anti-smoking campaigner. 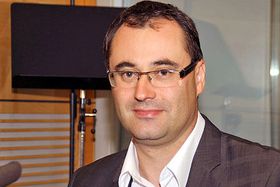 Boris Šťastný, photo: Šárka Ševčíková “This is government legislation, and I therefore assume it will be dealt with as such. I’m of course aware that some of my colleagues might have some objections but I see a clear majority in both the lower house and the Senate.”

The proposed smoking ban is also increasingly popular with the public: while some 26 percent of Czechs over the age of 18 smoke, a survey showed last year that nearly 80 percent of those polled agreed with the measure. Many restaurants, particularly in cities, have also become smoke-free of their own will, and others only allow smoking later in the evening.