After years of deliberations, the Czech government on Monday voted in favour of lifting brown coal mining limits in the Bílina pit in northern Bohemia, where there are over 100 million tons of coal still in the ground. Although extended mining will not require the demolition of nearby villages, the locals are worried it will have a negative impact on their living conditions and may set a dangerous precedent. 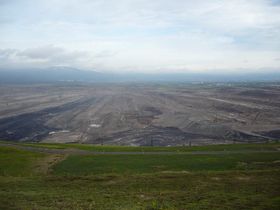 Bílina pit, photo: cool3d, CC BY 3.0 The limits on brown coal mining in northern Bohemia were established in 1991 as a guarantee for municipalities situated on coal deposits that they would not be pulled down to make way for further excavation work. However the government’s long-term energy strategy has not broken with the country’s dependence on brown coal and in the past year the government has cautiously floated the idea that the limits may not be untouchable. Following a number of safety-and profit studies, the cabinet took a vote on Monday, approving the lifting of brown coal mining limits in the Bílina pit and opening the way for mining to continue in the area until 2055. Prime Minister Bohuslav Sobotka defended the decision, saying that it was an acceptable compromise in view of the country’s needs.

“This partial lifting of limits at Bílina will not require the demolition of houses or radically infringe on the life of nearby communities. I think we have agreed on a viable compromise here and it is important to stress that we will need this coal for the hearting industry, electric power plants and households.”

Not everyone agrees. Many of the locals from the vicinity of Bílina turned out to boo the cabinet ministers as they arrived for Monday’s session in Ustí nad Labem. And ahead of Monday’s vote a group of NGOs and over 150 doctors wrote an open letter to the prime minister warning that further mining at Bílina would have a negative impact on the health and quality of life of the local population. Doctors point out that already the region has a higher than average incidence of lung cancer, asthma, and allergies as well as more infant mortality and inborn defects.

Protest against lifting brown coal mining limits in Ústí nad Labem, photo: CTK In response to this protest, the ANO party of the coalition government has requested a guarantee that excavation work will not come closer than 500 meters from the nearby villages Branany and Mariánské Radčice so as to protect the inhabitants from excessive dust and noise. The cabinet argues that in addition to the needed brown coal, the move will provide work for over 1,000 people – miners and staff –at the Bílina pit by 2024.

Miners have for long pushed the government to lift the limits on coal mining in north Bohemia and hundreds of miners from the CSA mine on which the government voted to maintain the set limits and proceed with a phase-out operation turned up to express their anger on Monday. Although a final decision on the CSA pit has been left to future governments, the head of the local miners’ union Arnošt Ševčík says that unless a decision comes this year it will be too late. There will be a phase-out of people and technology and in five years’ time hundreds of miners will have lost their jobs, he predicted.