The head of the Czech FA Ivan Hašek announced on Tuesday he was taking an unusual but necessary step: in addition to his current responsibilities, heading the national football squad. The team has floundered in World Cup qualifying and is now at risk at failing to make the tournament in South Africa in 2010 - unless someone turns it fortunes around. It is hoped that Hašek, a highly-respected former player and coach, could be the right man for the post. 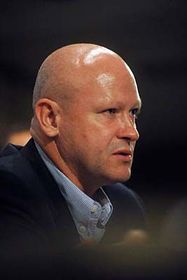 Ivan Hašek, photo: CTK It probably wasn’t the solution Ivan Hašek wanted but it was a decision that had to be taken: for someone to take responsibility for the troubled Czech team and give it a fighting chance of reaching next year’s World Cup. On Tuesday the recently-elected head of the Czech FA announced he would take on the additional task of leading the team, an unprecedented move he described as necessary under the circumstances. The reason? Other suitable candidates for the job were few, not least after Slavia coach Karel Jarolím turned his offer. On the other hand, few could be arguably as qualified as Hašek himself, who has said he will manage the team only through qualification – not in 2010. A little earlier I spoke to Filip Saiver, who writes for Czech daily Mladá fronta Dnes. Here’s how he assessed FA head’s decision:

“Certainly it’s an unusual move for him to be both coach the team and head the FA. On the other hand, I can’t think of a better solution, especially after Jarolím turned Hašek’s offer down. It’s certainly a risk. On the other hand, he has a lot of support among players and the league. He has their respect and is capable of turning things around.” 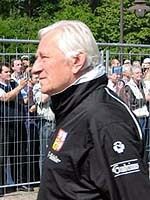 Karel Bruckner, photo: Ondřej Prokop, ČRo As a player Hašek earned 56 caps for the national squad. He even captained Czechoslovakia in the 1990 World Cup. Later, he led Sparta Prague to two league titles, so he is familiar with both success and pressure. He also won’t be alone in running the Czech team, announcing on Tuesday the names of several assistants as well former team coach Karel Bruckner as an advisor. Bruckner led the Czechs in their phenomenal run in Euro 2004 and has many years of experience. His addition as an advisor won’t hurt, Filip Saiver says”

“Including Karel Bruckner was important. He was involved with the team in the past and I don’t think anyone can doubt he is capable of raising morale.”

World Cup Qualification will continue in the autumn and for the Czechs to have a better chance of qualifying it would be ideal if they could win all four remaining matches. One advantage for the Czechs is that in their group there is no real runaway leader: the Slovaks are currently first, but the Czechs can still come back if they redouble their efforts. Slovakia, in September, will be new coach Ivan Hašek’s first big test. 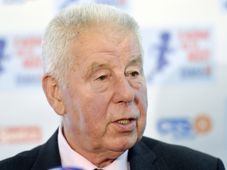 In Sports News this Monday: Czech hopes of reaching World Cup recede after goalless home draw with Italy; Euro 2004 side reunites for…