For the first time since he stepped down as Czech President, Vaclav Havel has appeared before journalists to comment on the political scene. Speaking in front of a crowd of hand-picked journalists in a downtown café in Prague on Tuesday, the former president talked about more than just Czech events in the past year. 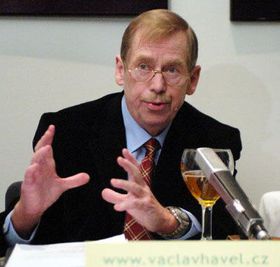 Vaclav Havel, photo: CTK "As I am not an official figure anymore, I was able to open our gathering in this unconventional way," said former president Havel after he blew a fanfare on a harmonica to begin the press conference. During the hour-long meeting, Mr Havel touched on many topics concerning domestic politics, but avoided direct criticism of the government or his successor Vaclav Klaus. Mr Havel said that being an ex-president did not allow him to comment on politics as freely as he had expected, because his political past committed him to loyalty. However, the former Czech president expressed disagreement with the government's choice of Milos Kuzvart for Czech Republic's EU commissioner. Vaclav Havel also spoke critically about the proposed European Union Constitution. For some analysis I spoke to political commentator Jan Petranek.

"Vaclav Havel presented himself as a dramatist. He really is more of a dramatist than anything else and he staged the news conference in a theatrical way. He commented on a number of questions as a humanist, as a man who cares more about how Man lives, whether one can freely develop and from that position he criticised the fact that the European Constitution creates a rigid legal framework for the states, instead of putting human beings first." 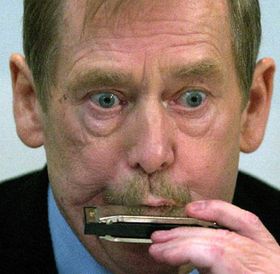 Vaclav Havel, photo: CTK In the past year Vaclav Havel has not commented on domestic politics, nor has he become an active critic of his successor Vaclav Klaus as some had expected.

"I'm not giving up political activity, I just don't want to get involved in everyday political games. If I come to a conclusion that the time is ripe, I'm prepared to speak up if matters of importance are concerned. If somebody was about to expel lesbians, the first thing they'll have to deal with will be my shouting and my hunger strike."

In the past critics of Vaclav Havel often accused him of paying more attention to international or global issues than to what was going on in his own country. A year after he left office, Mr Havel is still strongly concerned with international issues. Political commentator Jan Petranek.

"I'm sure even behind the bars of prisons where he spent so many years, Vaclav Havel realised he was a prisoner on Planet Earth. He always felt like a citizen of the world. He is concerned about events in the Czech Republic as well as various problems around the world. For Vaclav Havel the intellectual state of the world is important. I think he feels he maintains a dialogue with the world. This is something Vaclav Havel will never be able to get rid of and what at the same time enriches Czech culture."

Mr Havel closed Tuesday's gathering as he had begun it - blowing a few notes on his harmonica.