Since the early 1990s, the Czech Republic has become a destination for a large number of immigrants and refugees from all over the world. Most Czechs recognize that immigration is and will continue to be an increasingly important factor for stemming a declining birth rate and spurring future economic development, but immigrants and refugees often experience great difficulty integrating into Czech society upon arrival. Some, like the Centre for the Integration of Foreigners attempt to ease their transition.

Many foreigners are attracted to the Czech Republic because of its higher living standards, democratic norms, and strong labor market. But learning how to function in Czech society - learning the Czech language, customs and laws - can be a challenging process on top of homesickness and alienation. In 2005, the Centre provided counseling and assistance to over 1,200 people, most of whom were asylum seekers. The Centre's Project Co-ordinator, Zuzana Bednarova, explained their activities.

We deal mostly with people from the former Soviet Union, and then we deal mostly with refugees, and they come from all continents. But mostly they are from the former Soviet Union. We have six social workers, who assist them with officers, with documents; they go with them to Ministry of Interior when they seek citizenship and many other things, which depend on the situation of each migrant.

One of the guests at the Centre, Aina Khallyeva, shared her story. Khallyeva, who worked at Radio Free Europe and is a student of Turkish and Farsi languages at Charles University, came with her family from Turkmenistan.

My situation wasn't common because ten years before, when we came to Czech Republic, we came here by invitation of radio. They invited my dad, who is a journalist, and he got official invitation to come to Czech Republic and to work here. Of course we came here because it was a dictatorship regime in our country, but our conditions were normal - we didn't escape without money, or without passports. It was a normal working invitation.

But in the year 2000, when our travel documents expired - because we had these old Soviet passports - we applied for Turkmen passports but Turkmen authorities asked us to come to country, but we didn't know if we would return, so we just asked for refugee status here in Czech Republic and we got it. And, last year I got Czech citizenship.

Khallyeva is undoubtedly a success story. But, as she points out, the integration process is filled with hard work and, often, disappointment. 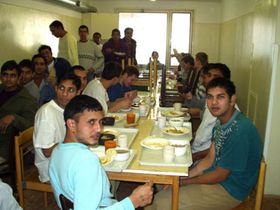 In addition to navigating the Czech bureaucracy and proving themselves to be productive members of society, other common obstacles to integration include xenophobia and racism. Attitudes have improved in the last fifteen years, but a good number of Czechs still remain ambivalent, especially to those from the former Eastern bloc. Others, though, continue to hope that the situation will improve and xenophobic attitudes will change with time.