Highway from Prague to Hradec Králové completed in record 38 years

The last stretch of the D11 highway linking Prague with Hradec Králové opened to traffic on Monday after an unbelievable 38 years and 11 months. The legal battles that delayed its construction have many people asking whether the country would not benefit from a stricter law on compulsory purchase. The last stretch of the D11 highway linking Prague with Hradec Králové, photo: ČTK After 38 long years the D11 highway is finally linking the cities of Prague and Hradec Králové, but the usual fanfare that would have accompanied the opening of a new motorway was notably absent. Although Transport Minister Dan Ťok himself turned out to wave through the first cars on the new four-kilometre stretch of the road a certain degree of embarrassment marked the fact that it had taken more than ten years to build.

Jan Rýdl from the Road Management Authority said the construction process had been a painful one.

“We are now in a situation where we can say “all’s well that ends well”, but we very much hope we will never encounter such problems in highway construction in the future.”

Construction of the D11 highway started in 1978 but was repeatedly interrupted by battles with landowners and environmentalists. Of the close to 39 years it took to build the 90 km stretch of the highway only 18 years was spent in construction, while twenty years was lost in waiting for permits, agreements and court verdicts.

The most dramatic phase was the nine-year -long negotiations and court battles with land-owner Ludmila Havránková who refused to sell her property and engaged in a long battle with the authorities that filled the front pages of Czech dailies and made her a household name. Between 2006 and 2014 construction work had to be halted, stopping short just four kilometres from Hradec Králové and drivers were forced to use a detour through several villages which were heavily burdened by the flow of heavy traffic. At the end of 2014 agreement was finally reached with the farmer who demanded land in return for that which she was to give up and work on the highway was able to resume a few months later. “We should take an example from Poland in this respect. If a construction project is in the public interest we should have a law on compulsory purchase and if landowners dig in their heels after a certain period of negotiations we should be able to say that’s enough, the work cannot be held up any longer.”

Although under Czech law expropriation is possible in certain specific circumstances, it is rarely enforced and the law is strong in defence of land-owners interests. Expropriating land is still a sensitive issue in a country which saw 40 years of communist rule, on the other hand not only the D11 highway –which is projected to lead another 90 km to the Polish border –but other construction projects could benefit from fewer delays. 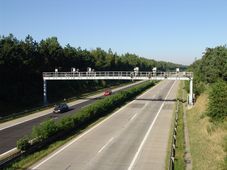 Agreement with landowners to allow completion of D11 motorway

Completion of the D11 motorway can go ahead after 16 years. Over all those years, the final construction was hindered by a seemingly… Government opts for expropriation to push through strategic motorway link

For several years a battle over a piece of farmland has stopped a strategic Czech motorway project in its tracks. On Monday the government…