A year ago this coming Sunday, a 33-year-old footbridge in Prague’s Troja district collapsed, leaving four people injured, two severely. That incident set off a flurry of technical inspections of bridges stretching across the Vltava River and beyond. It’s not a pretty picture. 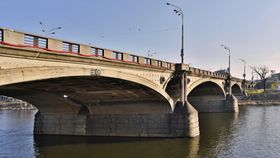 Hlávka Bridge, photo: Tomáš Vodňanský / Czech Radio Hlávka Bridge, built in 1910, has been deemed beyond saving while Libeň Bridge, built in 1928, is on life support – the new Prague City Council having this week reversed an earlier decision to tear it down, which led to an outcry from architects and conservationists. Professor of architecture Zdeněk Lukeš notes that both bridges, built by a famous team, have suffered from decades of neglect – and both, he says, can and should be saved.

“Libeň Bridge is a very important example of architecture from between the wars. It was created by a famous Czech architect, Pavel Janák, who was a leading figure in the cubism style before and later was also the [supervising] architect of Prague Castle – after Jože Plečnik – from 1936, in the era of President Edvard Beneš.”

“He collaborated with engineer František Mencl, one of the leading experts on bridge architecture, especially concrete bridges. It was the second bridge by Janák – the second one was Hlávka, which is now also in bad condition.”

Libeň Bridge was temporarily closed in early 2018 and until this week, a decision had yet to be made on whether to knock down or repair it. Hlávka Bridge is Prague’s 13th going by the flow of the Vltava River, on the border of the New Town district, and provides access to Štvanice Island. Hlávka Bridge is in worse shape, Prof. Lukeš says, because it simply wasn’t designed for the heavy road and tram traffic of recent decades, since it became part of the “magistrála” network.

“Libeň Bridge was built in the style of constructivism between 1927 and 1928, and was opened by President Tomáš Garrigue Masaryk ten years after the establishment of an independent Czechoslovakia – that’s why the date was so important.”

“For me, the bridge is one of the best examples of architecture of that period. I’m happy, in the end, the decision of the town hall is to restore the bridge.”

Libeň Bridge, photo: KarelJ, Public Domain “Fortunately, the best part of the bridge – the arches just over the Vltava River – are in better condition. That’s why it’s possible to restore. And then maybe some parts not so nice or important could be replaced with copies.”

“On the other hand, we had decades to restore these structures, and nothing was done. I had written many articles about the bad condition of the bridges but with no response. Now I hope for a better situation with the new people in the town hall. Every bridge over the Vltava River needs special attention.”

Prof. Richard Biegel of the Institute of Art History at Charles University says to repair one bridge and not the other would be an act of barbarism, as each is valuable in its own right and they were by designed to complement one another.

“The first very important thing is that the bridges in Prague are something like a composed group of architecture. It was a concept of František Mencl, who was the headmaster of department of bridges, and he enlisted the best architect of his time, in the early 20th century, into the 1920s and 1930s. And he decided that all the bridges should be vaulted, because of the Charles Bridge and others, so there should be some contextual thinking. But in the language of architecture, they had to be very modern and contemporary.” 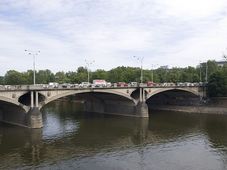 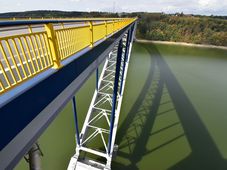