Czech hockey club Litvínov on Thursday clinched their first-ever Extraliga title, downing opponents Třinec in a deciding game 7. Litvínov at one point led the series 3-1 but Třinec clawed back to force a nail-biting finish. 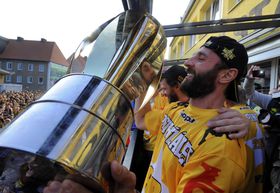 Martin Ručinský, photo: CTK Only two goals were scored in Thursday’s deciding game 7 between Třinec and Litvínov. But that did not mean tension wasn’t running high: with the first two periods scoreless, the fight for the playoff title came down to the final 20 minutes. Litvínov arguably had more to lose, having at one point had a stranglehold on the series.

Moreover, while the club from the small North Bohemian town has reached the final before, it had always faltered at the last stage, never crossing the proverbial finish line. All that changed on Thursday evening, with players at last hoisting into the air the Masaryk Cup. Michal Trávníček was the first to lift the trophy; the team also included former NHL player Martin Ručinský, who spoke with Czech Radio after.

“The last few years I have thought of nothing else when it came to hockey than winning the title for this town, for this club. The club waited 56 years for this. It was not a dream, it wasn’t about luck. It is an unbelievable feeling and a great payoff for me, at my age, at this point in my career.” 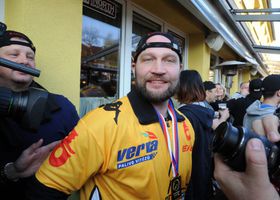 Jiří Šlégr, photo: CTK Ručinský, at 43, is a veteran forward who holds three World Championship golds as well as Olympic gold from Nagano ’98. Thursday’s victory, though, was arguably among the sweetest, also for fellow veteran player Jiří Šlegr, who wasn’t on the ice but celebrated with the rest of the team after the final buzzer. He recalled the late former player and former national squad coach Ivan Hlinka, who had also played for Litvínov. Hlinka died in a car crash in 2004. Jiří Šlégr said this:

“When we won we had tears in our eyes and wondered whether he could see us from hockey heaven and that he had given us a hand from above.”

It was top-form by Litvínov on ice, however, that secured the win. Litvínov’s netminder Pavel Francouz stopped 36 shots for his fourth shutout of the playoffs, while František Lukeš scored late in the third period to break the deadlock, adding another goal into the empty net for padding.