Jaromir Jagr, perhaps the most successful Czech ice hockey player of all time, has just taken a break from training ahead of the new season to try his hand in a new profession: acting. However, his role in a Czech Television serial shouldn't be too taxing for the megastar forward: he is playing himself. Jaromir Jagr, photo: CTK "Posledni sezona" ("Final Season") is the name of a new drama serial being made for Czech TV by actor Martin Dejdar, in which he plays a fading ice hockey star whose career is coming to a close.

In the first episode Dejdar's character appears in a game featuring several real-life stars, including Jiri Slegr, Martin Straka - and Jaromir Jagr. Jagr flew to Liberec for Tuesday's shoot from Switzerland, where he is at a training camp with Russian club Omsk. The Kladno-born star joked that he had received permission after telling the club's management he was going to make a "hit film". 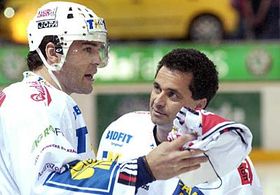 Jaromir Jagr, photo: CTK and Martin Dejdar, photo: CTK It won't be Jagr's first time on screen: his former club Pittsburgh Penguins featured in the 1995 film Sudden Death starring Jean Claude van Damme, although the team merely appeared in the background during an action scene. The toothy player has also appeared in a television advertisement for chewing gum.

But Tuesday's shoot at Liberec's Tipsport Arena was Jagr's first time speaking on camera. He said afterwards he didn't know if the director was satisfied with his performance, although the fact he didn't have to repeat his scene too many times was probably a good sign.

Jaromir Jagr is 33 and it surely won't be too long before he is facing his own "final season". Would he consider a new career as a thespian? Not likely: Jagr said his acting debut would also be his last time in front of the cameras.