With temperatures in Prague expected to drop as low as minus 20 degrees in the coming days, the Czech capital’s homeless are at high risk. Due to the harsh weather, homeless shelters are already close to operating at full capacity. To help battle deaths from exposure city hall officials have arranged for a large heated tent to be put up for those with no roof over their heads. 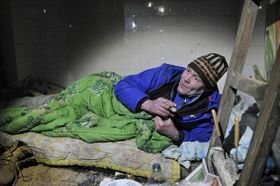 Photo: CTK After a relatively mild start to the winter, the harsh frost and icy temperatures of minus ten or even minus 20 degrees that have hit the country have caught almost everyone in Prague by surprise. The cold weather is especially hard on the homeless –shelters are operating almost at full capacity and many of the city’s homeless find themselves without a place to go. The current cold front has already taken its first victim, a 59-year-old homeless woman who was found dead in a deserted area in the capital’s Veleslavín district on Tuesday.

To help battle the cold and increase shelter capacity, the city’s Center for Social Services is opening a special tent for the homeless on Prague’s Rohanský island, an area where many of them gather. The tent, which opens Wednesday, will have a capacity of 50; two other tents with the same capacity will be installed at other locations in the city. 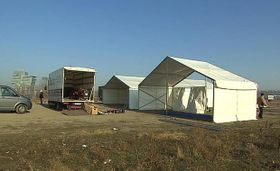 The tent for the homeless on Prague’s Rohanský island, photo: Czech Television In addition, homeless facilities across the city have already extended their opening hours to offer men and women without a home refuge from the cold. Petra Lakatošová is the director of the Prague branch of Naděje, a homeless charity.

“In response to instructions from Prague city officials, Naděje and other organizations that assist the homeless have extended the opening hours of their daytime care centers. Since last Thursday, they have been open all night. This way, we were able to quickly increase shelter capacity – even though the homeless who come to these centers have to lie on the floor or sit on chairs, since there are no beds. But they do provide shelter from the cold. All the city’s charities are informing each other of their capacity. Last night, all chairs and all beds in the capital’s shelters were taken.”

Since last October, a total of eleven cold-related deaths occurred in the capital, and many believe that this could have been avoided. Experts and those who work with the homeless have repeatedly criticized the city for being unprepared. 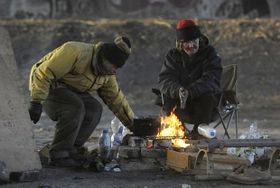 Photo: CTK “What we need is a guarantee of extra beds in homeless shelters for the winter period, so that people can be saved from the consequences of the cold. This should be prepared far ahead of the start of winter, not during the onset of the cold, when we are already in a crisis situation.”

Outside of Prague, record lows could even reach up to minus 35 degrees, and municipalities across the country are also preparing to battle cold-related deaths.