A major new exhibition by the Chinese artist and dissident Ai Weiwei opens in Prague on Thursday evening. The show is centred around an enormous recreation of a lifeboat highlighting the plight of refugees – and Ai told reporters that Europe’s handling of the crisis raised major questions surrounding its values. 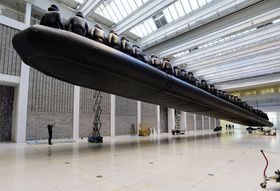 'Law of the Journey', photo: CTK A huge hall at the National Gallery’s Trade Fair Palace is now home to Law of the Journey, a 70 metre long reimagining of a lifeboat carrying refugees, who are also made of rubber and have blank faces.

It is just one of a number of works on show by Ai Weiwei, the world famous Chinese artist and dissident who in recent times has been focused on Europe’s migrant crisis.

Indeed, Law of the Journey is his biggest piece yet addressing the issue. Speaking to journalists ahead of its unveiling, Ai said the rubber used had come from China – and also reflected the refugee situation.

“We worked with a factory to make this – the best factory for boats. We asked them where they were selling those boats – suddenly they were selling so many boats – and they said Turkey. We see hundreds of thousands of boats coming in and they come from China. So we had the same company do this work.”

The artist also said that Europe’s handling of the migrant crisis asked major questions of the continent’s values.

“If we see somebody who has been victimised by war or is desperately trying to find a peaceful place… if we do not accept those people, the real challenge and the real crisis does not concern the people who feel the pain but rather the people who refuse to recognise it, or pretend that it doesn’t exist. That is both a tragedy and a crime. I think it is immoral for people who are fortunate not to help others.” 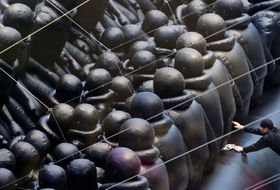 'Law of the Journey', photo: CTK Law of the Journey was commissioned by Jiří Fajt, the director of the National Gallery. Given the critical view many Czechs seem to take toward asylum seekers, did he anticipate any negative reactions to the Ai Weiwei piece?

“If you decide to come out with this kind of project you have to expect all kinds of reactions, so we are ready for that. I think that when people come in they will be addressed very much emotionally. That is what we actually wanted to initiate – once they are addressed and somehow moved, they can structure their own opinions and arguments. And this is actually what culture is obliged to initiate.”

The Ai Weiwei exhibition and a number of other noteworthy shows get underway at the Trade Fair Palace with the institution’s annual Grand Opening on Thursday night. However, visitors will have plenty of time to see Law of the Journey as it will remain in place until January next year. 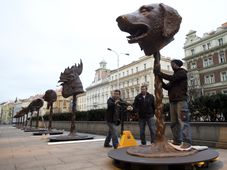 There will be great excitement in the Czech art world on Friday when Ai Weiwei makes his first appearance in Prague. The world-famous…

National Gallery to get permanent Ai Weiwei piece next year

The Czech National Gallery is to get a permanent piece by the Chinese dissident artist Ai Weiwei from next year, the institution’s…