Not all Brits are ecstatic as their country leaves the European Union this Friday. Some are looking to secure EU citizenship through a second passport. This is also the case in Czechia where the number of British nationals applying for Czech citizenship has increased more than threefold since 2016. Mark Child, photo: Archive of Mark Child Mark Child has been living in the Czech Republic since 1995. He applied for Czech citizenship last year after beginning the process in 2016 and was ceremoniously sworn in as a Czech citizen on Thursday, just one day before the official Brexit date.

He says Brexit was not the sole reason for his choice to get a Czech passport, but certainly a factor and a subject of discussion among his community.

“I think the big concern not just for Britons living here in Czechia, but for the roughly 3 million British expats living in the European Union is that we as humans and family members do not end up being political pawns in the negotiations between Britain and the EU.”

Statistics from the Ministry of Interior seem to back this concern up. The number of applications has been rising since the Brexit referendum was held in June 2016 says Interior Ministry spokesperson Ondřej Krátoška.

Even if they have not yet been sworn in as Czech citizens, those who have applied before the Brexit deadline will benefit from the lower conditions benchmark that membership of the EU provides.

Ondřej Krátoška from the Ministry of Interior explains. 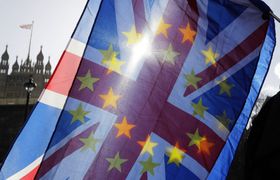 Photo: ČTK/AP/Kirsty Wigglesworth “As far as changes in application conditions are concerned, then those handed in before the Brexit date will continue to be considered as applications from EU citizens, for whom, for example, the minimum residence period requirement is three years.

“However, applications sent after the UK leaves the European Union will require a permanent residence of five years.”

If the basic criteria are met applicants for Czech citizenship then have to score at least 60 percent in a subsequent multiple choice Czech history and culture exam as well as passing a language test.

Mr Child says that, since he has been living in the country for decades, neither posed a particular challenge for him. What he does see as a potential challenge for prospective applicants is the surrounding bureaucracy.

The Ministry of Interior registered more than 8,000 British citizens living in the Czech Republic in 2019. The amount of Brits registered under a permanent residency permit was 2,666.