Czech Interior Minister Milan Chovanec is taking the battle over whether to give Czech firearms holders the right to use their weapon against terrorists to Parliament. Although the proposal was not sanctioned by the government, the minister says he will fight for people’s right to hold a weapon and use it in self-defence even if it goes against present EU policy. 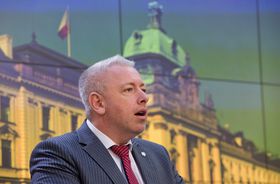 Milan Chovanec, photo: CTK Minister Chovanec has not been sparing in his criticism of a proposed amendment to the EU firearms directive which aims to tighten controls on the legal acquisition and possession of firearms as one means of fighting against the threat of terrorism. He claims the idea is totally misguided since no terrorist act committed in Europe was committed using a legally-held weapon and compares it to banning water in the event of a fire.

“As proposed, the tightened EU firearms directive would hurt Czech firearms holders, according to our calculations it would affect some 1,000 thousand legally held weapons. We are prepared to fight this and we would file a lawsuit against such as directive as soon as it was approved.”

The interior minister is pushing a different approach in the Czech Republic– one that would enable Czechs with a firearms license to use their weapon against perpetrators of terrorist attacks and thus assume greater responsibility for national security in the event of a crisis. His proposal has evoked a mixed response with the government divided on the issue. In cases where the government neither supports nor rejects a proposal the battle shifts to Parliament ground. Minister Chovanec says he has tested the waters and believes that there is a good chance of securing the 120 votes that a constitutional amendment requires in the lower house. He says criticism of the idea has been hugely exaggerated both at home and abroad.

“This will be no Wild West, no “weapon in every family” policy as it has been described, merely a standard approach to firearms possession; a clause in the Constitution of the Czech Republic saying that possession of firearms is part of this country’s culture and is the right of every Czech citizen.” 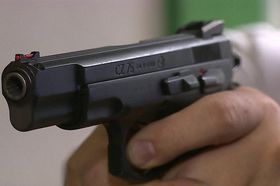 Photo: Czech Television According to the present draft amendment the right to use legally-held weapons against terrorists would only apply to Czech nationals and firearms holders would have to undergo stricter periodic tests. Opponents have criticized it as incredibly risky and unnecessary since the country’s constitution already enables people to use a legally held weapon in defence of their life and property, be it in adequate measure to the risk posed.

Meanwhile, the government on Monday received a petition signed by 50 thousand firearms holders and hunters unions who fear the EU firearms directive will severely restrict their rights. A number of Czech MEPs, among them Jiří Pospíšil and Stanislav Polčák say that while they do not approve of Minister Chovanec’s strategy they will do their utmost to soften the proposed amendment to the EU firearms directive which is due to be debated in the European Parliament in March.