The Ministry of Interior has opened a shop in the Prague city centre – actually, more of a showcase of stolen goods and assets seized in criminal proceedings, up for auction. The aim is to raise funds more quickly to compensate victims of crimes. 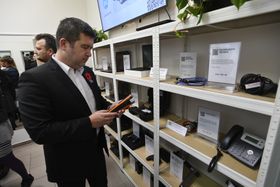 Jan Hamáček in CenZA, photo: ČTK/Michal Kamaryt In Czech, the abbreviated name of the Centre of Seized Assets of the Ministry of Interior – “CenZA” – is rather catchy and clever. It sounds both like the Czech word for “sensation” and signals that bargains are to be had inside “for next to nothing”.

The second-hand goods on display – mobile phones, notebook computers, game consoles, and even washing machines – either were stolen and had been collecting dust in a police evidence room, or had been bought with ill-gotten gain, and simply confiscated. Either way, disposing of them has long presented a challenge.

While the CenZA showroom on Na Perštýně Street is the first in Prague, the police have already opened one in Ostrava and expect to expand the pilot project. Deputy Police President Jaroslav Vild explains the overall aim.

“The founding of this store makes selling seized assets far more efficient. It speeds up the process. This benefits the police, who otherwise are burdened with an activity not in our mandate, namely administration. It also benefits perpetrators, in that they can pay for part of the damages by selling their assets. But it’s especially beneficial for victims of crimes, getting them compensation faster.”

The number of reported crimes in Prague has dropped every year since 2013 and about 40 percent in total over the past five years. Pickpocketing and car break-ins represent the lion’s share of reported property crimes. But organised criminal activity, especially forms of online fraud, has steadily risen. 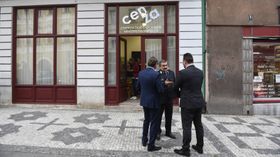 CenZA, photo: ČTK/Michal Kamaryt And while crime is down, the value of assets seized by the police is up – in total police last year alone seized assets worth more than 10 billion crowns. Interior Minister Jan Hamáček says the CenZa project should help raise awareness of what’s on offer.

“Of course we post items on the Internet, but here in CenZa people can actually see what the police have seized and what’s up for sale in police auctions…. I don’t think we can expect to sell 10 billion crowns worth of goods through these stores, but I am pleased with this pilot project, through which dozens of cars and hundreds of electronic appliances will be auctioned off.”

Smaller items on display at CenZA, such as consumer electronics can be purchased on the spot. But those in the market for cars, houses and other big ticket items will still need to take part in online public auctions by the Centre of Seized Assets.