"Prejudice. That's the main thing about the Czech Republic because a lot of people have no personal experience with people coming from different countries and cultures and they keep their distance from these people and that is also the atmosphere in which the stereotypes start to appear. The Czech mentality is not violent but they are prejudiced and that is the main problem."

Do you monitor the number of racially motivated crimes?

"Unfortunately we do not have specific means, which would enable us to monitor every crime that has been committed but using the police statistics we are aware of over two thousand racially motivated crimes that have been committed since 1990, starting with verbal insults and ending with physical assaults and even murders. Every year the number increases. Last year we had over 300 and this year we may have about 400-500 crimes and I think that's a lot of victims."

What percentage of offenders of physical attacks are actually prosecuted?

"I have to appreciate the work of the police force because in the past two years they have really focused on this problem and now they actually catch most of the people who commit these crimes and they get them to court so most of the cases are being solved."

"Well, it's not always right to look at the problem from one point of view because one thing is how you see the situation and the other thing is how the legislation sees this situation. This may result in paradox situations, which then are being presented in the media in a different way than they actually happened. But the police still have a lot of things to work on and to improve, starting with their professionalism and their attitude and the things that would make them a public service not only for the majority but for minority groups also. The main thing is to start building a trustful relationship." 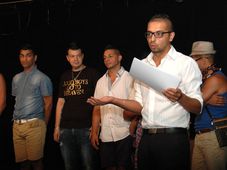 The latest Rainbow Map, a comprehensive evaluation of 49 European countries according to their attitude towards sexual minorities ranks…