Britain’s departure from the EU was the focus of talks in Prague on Tuesday between the Czech foreign minister, Tomáš Petříček, and his Irish counterpart, Simon Coveney. The latter said measures proposed by the London government do not come close to replacing the Irish border backstop – and that there may be no solution to the divisive issue. Simon Coveney, Tomáš Petříček, photo: ČTK/Kateřina Šulová Among the notable guests at this week’s gathering of Czech ambassadors in Prague has been Simon Coveney, Ireland’s tánaiste (deputy prime minister) and minister for foreign affairs and trade.

The Republic of Ireland is the only EU country to share a land border with the United Kingdom.

This status is reflected in the Irish backstop, an insurance policy that following Brexit would keep Northern Ireland in the single market and the entire UK in a customs union with the EU, so avoiding a hard border.

The backstop is anathema to British leader Boris Johnson, who has demanded that it be removed from the exit deal agreed by his predecessor.

Mr. Coveney discussed that issue with his Czech opposite number, Tomáš Petříček, on Tuesday.

Speaking to the media afterwards, he expressed gratitude for Mr. Petříček’s support for Ireland on Brexit.

“First of all, I want to thank him for his solidarity.

“This is an EU negotiation with the UK. Sometimes Ireland finds itself in the spotlight, because Irish issues are proving difficult to resolve. But this was never an Irish-British negotiation. It was always a collective EU negotiation with a large member state that’s looking to leave. And this is a British choice, not an EU choice.

“There are responsibilities that come with the consequences of such a dramatic decision to leave the European Union and its single market and customs union.”

Simon Coveney said that a comprehensive Brexit deal had been agreed between the EU and the UK, only for it to be rejected by the London Parliament. Photo: Pete Linforth, Pixabay / CC0 Since then the new British PM has been looking to rewrite those rules, he told reporters.

“Our message is simple: We want to work this out.

“And if that can be the basis of an agreement, great.

“But I think we need to be honest here. The alternative arrangements that have been discussed to date do not do the same job as the backstop. Not even close. So let’s not pretend that solutions exist when they might not.”

Mr. Coveney, who also spoke to Czech Prime Minister Andrej Babiš, said the Brexit issue meant there were likely to be many more ministerial visits between Dublin and Prague in the upcoming period. 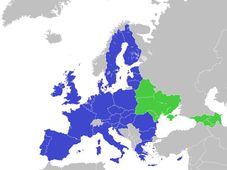 What lies in store for the Eastern Partnership 10 years after its establishment?

In 2009 the Eastern Partnership, a project seeking closer ties between the EU and its Eastern European neighbours was proclaimed in…