A film series devoted to Czech cinema opened in New York on Friday at the prestigious Film Society of Lincoln Center. The series, called Ironic Curtain: Czech Cinema since the Velvet Revolution, is running for seven days and showcases a wide range of Czech pictures made over the last two decades.

Ironic Curtain: Czech Cinema since the Velvet Revolution is curated by Laura Blum, who spent over a year preparing the project with the Film Society of Lincoln Center. Speaking just a few steps off Broadway at the Walter Reade Theater on Friday, she explained how it had all come about.

There is more to the series than film. It also includes an exhibition called Off the Wall: The Art of Peter Sís, featuring drawings from the artist’s book The Wall: Growing Up Behind the Iron Curtain. American filmmaker and editor Jeff Hush, who is Blum’s partner, worked with her closely on the exhibition. 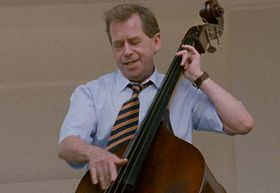 Citizen Havel “We loved Petr Sis’ work, and we had it in a book called ‘The Wall’ which was about his growing up behind the Iron Curtain. But we had to find a way to make it into a real art show. So two things happened – one, we decided to blow up the work to a much larger format, and the other is since the wall was such a theme, and Laura’s idea of the Ironic Curtain. We wanted to find a way of representing that beyond just images – we wanted to give a symbolic locus of that idea, so we created this wall of empty picture frames, on the wall of the gallery.”

Getting back to main focus of the Lincoln Centre festival, one of the highlights was a screening on Friday of Citizen Havel that was the documentary’s debut in the US. But it wasn’t the weekend’s only first, says Blum. 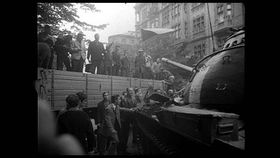 Ferrari Dino Girl “We’re extremely excited about presenting the North American premiere of the Ferrari Dino Girl, by Jan Němec, which recounts his dash across the Czech–Austrian border in 1968, after the Soviet tanks rolled in and he got a phone call at 4:30 in the morning, telling him that these tanks were in Prague, and he took his camera and his crew, and he shot and rushed this footage over the border to broadcast to the world what was happening.”

Ironic Curtain’s organisers also secured quite a coup: a preview of Czech Peace by the makers of the hugely successful Czech Dream. Their new documentary focuses on (now abandoned) US plans to build a radar base in central Bohemia.