Just over a year ago the Czech Republic lost one of its great sports heroes. Former hockey player and later national team coach Ivan Hlinka was killed in a car accident - at the height of his fame. A year on, an exhibition has opened in Prague as a tribute to the man who led the Czech hockey team from one victory to another.

Photo: CTK Ivan Hlinka, who was named the best Czech hockey player of all time, started his hockey career as a 12 year old junior in the Czech Club Litvinov in 1962 where he played for the next 19 years. During that time he helped Czechoslovakia win the World Championship three times in 1972, 1976 and 1977. He was one of the first players from Czechoslovakia to make the move to the NHL, where in the course of two years he scored 42 goals and 81 assists in 137 games. After 1987 he began coaching and brought the Czech national team two world championships and three Olympic medals in the 1990s.

Few Czechs are likely to ever forget the Winter Olympics in Nagano in 1998 - a victory which proved to be Hlinka's greatest triumph. His fatal accident last year cut short his plans for yet another world title. The Czech team vowed to win the 2005 World Championship in Vienna as a tribute to their late coach - and they did - in a breathtaking final against Canada. The team returned home bearing the cup with a picture of Hlinka tucked inside for the cheering crowds to see.

A year after his death the National Museum in Prague has opened an exhibition documenting Hlinka's life and brilliant career on the ice. A series of silver hockey cups documents Hlinka's early victories - but there are also many artefacts relating to Hlinka's private life: he was an amateur painter, woodcarver and an enthusiastic golfer. The museum's director Michal Lukes says he is proud to host the exhibition:

"I think Hlinka was a man who gave the nation many happy moments and if you ask me he did more for the country's image than a whole army of diplomats."

The visitors' book at the gallery shows just how true that is - there are enthusiastic comments from tourists from around the world, among them: Great Britain, Sweden, Italy, Canada, the United States and even Japan. One of the Czech visitors said that he'd travelled to Prague from Most, a town that's close to Hlinka's birthplace.

"Hlinka was from Litvinov and we're from Most so we often saw him around. And it was great. I went to school with many of the hockey players -Rucinsky, Lang - and you could say that he treated them like they were his own children"

Hlinka's tragic death was a blow for the Czech national team. He was replaced by another Czech hockey legend, Vladimir Ruzicka, who proved a worthy successor when the team won in Vienna this year. But Ruzicka decided not to stay for good, and now the national team is to be coached by Alois Hadamczik, who has yet to prove himself. So is Ivan Hlinka irreplaceable? Here's how one hockey fan put it:

"We'll always want to win. With Ivan or without him - we'll always play to win!"

And there's no question at all that that's exactly what Ivan Hlinka would have wanted to hear.

The exhibition called "Hlinka the Legend" is open at the National Museum, at the top end of Wenceslas Square until the end of October. 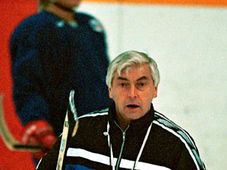 A tribute to Ivan Hlinka

Just over two weeks ago the Czech Republic lost one of its all-time great sports heroes, former hockey player and later coach, Ivan… 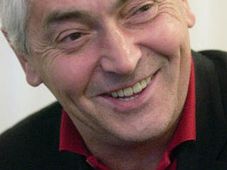 In this week's edition: the death of ice-hockey coach Ivan Hlinka; one year since the death of Radio Prague's Olga Szantova; Olympics…