Just one year ago, a photographer snapped the first-ever photo of a golden jackal on Czech soil. This week, a camera trap in the Milovice area in central Bohemia documented the fact that the species has settled down and started breeding in the Czech Republic. I discussed the latest discovery with Miloslav Jirků of the Czech Academy of Sciences: 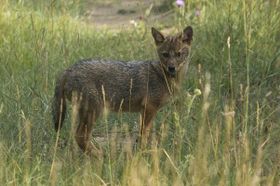 Young Golden jackal near Milovice, photo: CTK “What we found was a picture of a female golden jackal. The fact that it was a golden jackal was not surprising. We know that it appears in this locality. But what was surprising was that it was obviously a female taking care of her young, because of her very pronounced teats.”

So what does that say about the occurrence of the jackal on the territory of the Czech Republic?

“It says a lot, actually, because until now, there were just records of individual animals sighted not only in the Czech Republic but throughout Central Europe, and even north-west Europe and parts of northern Europe, as far north as Estonia and as far west as the Netherlands.

“But until now there was no evidence of jackal reproduction or breeding of this species outside its continuous range, which spreads from the Balkans all the way to southern Bulgaria.”

So what led to jackals migrating across Europe?

“Nobody knows what pushes the jackal outside its range but climate change and absence of large predators, especially wolves, are likely to be the main reasons.

How likely is an encounter between a human and a jackal here in the Czech Republic? 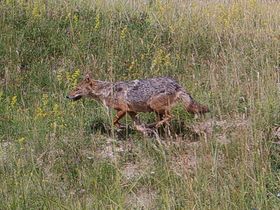 Female Golden jackal near Milovice, photo: CTK “On the one hand, the jackal is a very sneaky animal, which can be present in an area without being ever noticed by people. On the other hand, it is active not only at night but also by daytime. Here in the Milovice area in Central Bohemia I came across a jackal twice within quite a short distance, and it was midday.”

Do jackals present any danger to humans?

“Not at all. They don’t present any danger at all, not even to small livestock such as sheep and goats. The biggest animals that are usually hunted by jackals in Europe are animals of smaller sizes, such as rabbits, hares and pheasant.”

Are they actually protected here in the Czech Republic?

“No, the jackal is not protected, and it is not even recognised by Czech legislation. So it is actually equal to the dog.” 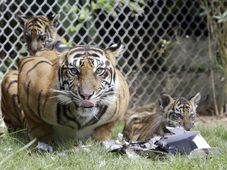 Tougher legislation will seek to crackdown on rogue animal breeders 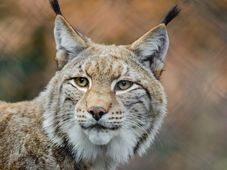 Czechs team up with other countries to protect endangered lynx

Czechs team up with other countries to jointly monitor and protect the endangered lynx populations in Europe.