Jaromír Jágr was one of the stars of the Czech squad that took ice hockey gold at the Nagano Olympics, which began 20 years ago on Wednesday. The veteran forward admits playing again at this year’s Olympics did cross his mind – and says the absence of NHL players increases Czech chances of repeating the famous victory of 1998. 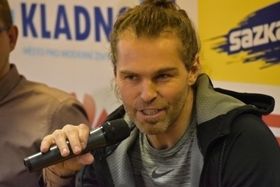 Among the stars of that Czech team was Jaromír Jágr, who last week returned from the NHL to join Kladno. Speaking at his new club, the all-time great said the Czechs had been spurred at Nagano by a 7:1 defeat at the hands of lowly Germany in 1996.

“We took the Olympics as kind of like revenge. Plus we had Dominik Hašek. He was the best goal-tender in the world. Everybody knows that at tournaments like that, short tournaments, you need a goaltender. When you have a good goalie, the game is half-won before you even start. Plus, most of the guys who were on the team played first or second line for their team, so nobody from the media really expected us to do anything, but inside the team we really believed we could do it. In ’98 it was a really special team.”

Though Jágr will turn 46 during the Pyeongchang Games, many Czech fans would love to see him in action again for the national side. He says he did consider returning at one point – but a knee injury ruled out that possibility.

“When I was practicing here this summer and I was still without a contract – I didn’t know if I was going to go to the NHL or not – I was kind of hoping that if I stayed here and played in the Czech league or somewhere in Europe I would get used to the bigger ice. I felt if I was going to be good enough to help the team there was a possibility to play. But right now I’m not ready, I’m not good and I didn’t play many games. So not a chance.” 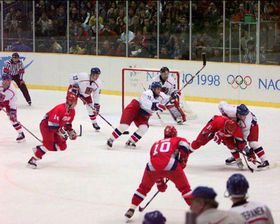 Nagano Olympics in 1998, Czech Republic - Russia, photo: Canadaolympic989, CC BY-SA 3.0 As for the current Czech team, Jaromír Jágr says the absence of NHL players from this year’s Olympics boosts their chances of repeating the success of 1998.

“Personally I think we have a pretty good chance. We have a lot of good players, especially in the KHL and even here in the Czech league. I think we have a better chance than if the NHL players would play. So the Czech team is one of my favourites to win the tournament, beside Russia and Canada.”

The Czech Republic will face the hosts South Korea in their first game in Pyeongchang on Thursday next week. 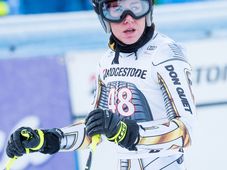 The year in Czech sport – from Ledecká to Kometa