Institutionalized care for disabled people in the Czech Republic goes back almost a century to the days of the Austro-Hungarian Empire. Ninety-five years ago in April of 1913 a prominent surgeon by the name of Rudolf Jedlička established a medical-and-educational facility which aimed to give disabled children and adults a chance to live a more dignified, active life.

Up until 1913 children with disabilities were destined to spend their lives utterly dependent on others - in a mental home or at best were looked after by their families. Those who were at least partially able to take care of themselves ended up on the streets begging. Rudolf Jedlička decided to change that. His goal was to give disabled children professional help which would enable them to live a normal life as far as their disability allowed. His motto was “to turn beggars into taxpayers”, in the best possible sense. In 1913 this was an ambitious plan and it took a while for the parents of disabled children to put their trust in the newly established institute. Jan Pfeiffer who is a rehabilitation specialist working with disabled children says that the institute first proved itself working with adults.

“The institute really took off in the war years on an intergration-programme for wounded soldiers. The army either wanted them back on the front-lines as soon as possible or else needed to give them an alternative existence.”

After World War I – in the years of the so-called First Republic - the Jedlička Institute flourished, establishing new facilities and workshops in which children with disabilities were trained to become carpenters, tailors, gardeners and weavers. Its trainees won a number of international prizes with their arts and crafts products, among them a prize from France and one from Exeter in Britain in 1926 – both for hand-woven carpets. But there were difficult times ahead for the institution. During the war years it was moved to accommodate Nazi troops and although it could return after the war the communist regime kept handicapped people very much in isolation – as if disabilities simply did not exist in communist society. However the institute continued with its good work and after the fall of communism in 1989 gradually efforts were made at government level to remove the stigmatization of disabled people and to help them integrate in society. Today the Jedlička Institute has four school and rehabilitation buildings, and its director Jan Pičman says that the schools ambition is pretty much what it was close to a century ago when Rudolf Jedlička decided he wanted to give disabled people a dignified life.

“We consider ourselves to be a quality, modern institute which helps children with disabilities to integrate in society and find a place in life. We prepare them for the real world out there and help them make the best of their abilities in order to ease their integration.”

However, once the schools’ students have finished their training and are ready to integrate – is society ready for them? A question I put to Kateřina Novotná of the Czech Association of Wheelchair-Users.

“I believe that the situation has improved a lot during the last 15 years, especially in Prague and the bigger cities. The Czech legal system now gives us protection – it has become normal to employ a person with a disability because the state offers companies a number of advantages if they employ disabled people. That is a major improvement. Although one must admit that people living in smaller towns and villages still have big problems finding work and that cannot be changed as quickly as we would like.”

Do you feel that people’s attitude has changed towards the disabled? That a disability is not as stigmatized as it was under communism? 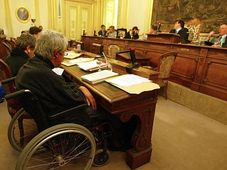 Public institutions failing in their duty to employ people with disabilities

According to a report presented to the cabinet by the minister for human rights and equal opportunities, Jiří Dienstbier, Czech public administration… 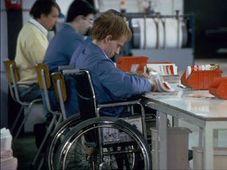 2006 saw the launch of “Increasing Adaptability of Disabled Persons”, a new project in the Czech Republic aimed at helping the disabled to… 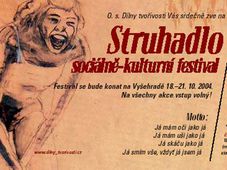 The early days of Dilny tvorivosti - the Workshops of Creativity - were difficult, but as it seems now dawn is finally breaking. The…