The 52nd Karlovy Vary international film festival comes to an end on Saturday night with the traditional glitzy awards ceremony. Alongside the announcement of this year’s prize winners, Hollywood star Jeremy Renner and veteran Czech director Václav Vorlíček will be honoured at the close of the biggest film event in Central and Eastern Europe. Khibula, photo: Film Servis Festival Karlovy Vary As every year, there are 12 films vying for the Best Film gong at the 2017 edition of the Karlovy Vary IFF. Among them is Khibula by Georgian director George Ovashvili, who won the top prize three years ago with Corn Island.

If Ovashvili is to repeat that feat he will have to overcome strong competition from the likes of The Cakemaker by the Berlin-based Israeli first-time director Ofir Raul Grazier, which received long ovations after its world premiere on Tuesday.

The Czech entrant for best film is The Little Crusader by Václav Kadrnka. Though it has been generally well-received it is based on a poem and has been described as a medieval road movie and may prove too unconventional to lift the main prize.

Whichever of the highly diverse selection of pictures has most impressed the five-member KVIFF Grand Jury will become clear at the closing ceremony early on Saturday evening.

As for the movies that have enjoyed the greatest reaction from the festival’s predominantly young audiences, the aforementioned The Cakemaker was leading the audience award rankings on Friday morning. Another domestic documentary, The White World According to Daliborek by Vít Klusák, has also been an audience hit. The director’s handling of his protagonist, a Czech neo-Nazi, has made it perhaps the most talked about, even divisive, film at the 52nd Karlovy Vary.

Also in the top 10 at the time of writing is US independent romantic comedy The Big Sick. It was the opening film and its popularity will be seen as confirming that the organisers made a good choice for the curtain raiser. 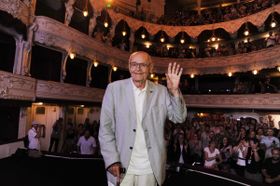 Václav Vorlíček, photo: Film Servis Festival Karlovy Vary The biggest name at the closing ceremony at Hotel Thermal’s Grand Hall will be Hollywood actor Jeremy Renner. The star of The Hurt Locker, Arrival and countless other hits, Renner (46) is introducing his latest work Wind River at KVIFF and will be presented with the festival’s President’s Award on Saturday evening.

Also receiving that honour will be the great Czech screenwriter and director Václav Vorlíček. Now 87, Vorlíček is responsible for such cherished movies as Who Wants to Kill Jessie, The End of Agent W4C and Three Nuts for Cinderella (also known as Three Wishes for Cinderella).

One of the most discussed Czech films at the Karlovy Vary festival is Old-Timers (Staříci) by Martin Dušek and Ondřej Provazník. It’s based…