Kasl quits as mayor, tired of "climate of arrogance and corruption"

Rumours of widespread corruption among officials at the Prague city council have been circulating for years. Insiders claim that officials regularly take bribes to speed up the paperwork, accepting bundles of cash in exchange for granting planning permission and so on. For the last three and a half years the mayor of Prague, Jan Kasl, says he's tried to persuade fellow councillors to crack down on bribes, and change what he describes as the "climate of incompetence, arrogance and corruption." On Tuesday he gave up the fight, saying he had come up against a brick wall. He singled out his own colleagues from the Civic Democrats (ODS) for particular criticism, and says he now plans to leave the party. Earlier today he spoke to reporters at a packed press conference in Prague, where my colleague Rob Cameron asked him why he'd finally decided to throw in the towel. 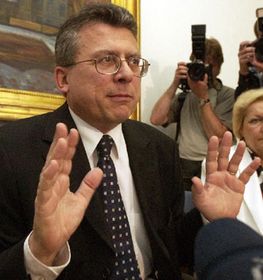 Jan Kasl, photo: CTK "I feel I'm not capable to fight with corruption, to promote my feeling of how politicians should behave, my feeling of political life as a public service. I was fighting my colleagues for three and a half years, and I understood that I would not change them."

Now you've resigned, are you now willing to name names and name individual councillors who you believe are not doing enough to prevent corruption or even who are corrupt themselves?

"None of these people showed the political will to cope not only with corruption, but it's the climate, it's clientism, it's the whole system of cronyism etc. All the people representing ODS in Prague have the same approach and I have a different approach. I couldn't win, so I decided to step aside and follow my own way."

Of course there are individual cases of corruption in Prague, now you have resigned, are you willing to go on the record and say "this project was granted permission because the official was bribed"?

"Don't misinterpret the position of a politician with the position of a policeman, or judge, or investigator. I'm not here to do that. I do my best, but I'm not here to be a judge. All the documents I've received I've given to the police, because it's their role to look [for corruption], to investigate and say yes or no. But I'm not ready to cover up any corruption, any unfair behaviour, and this was the main reason why the Prague ODS didn't want me anymore. [My] decision to leave the ODS is something they've wanted for years." 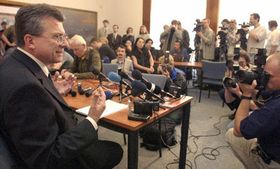 Jan Kasl, photo: CTK You've taken the step three weeks before the general elections, this is of course being interpreted as a way of damaging the ODS in Prague, because you are indirectly accusing them of being corrupt.

"I don't think it's accusing the ODS of being corrupt. Out timing here is a timing which depends on the last Thursday of every month [when the council sits]. I decided to do it now, because they would definitely try to fight, and kick me out on June 27th. I worry a bit about this coincidence, that somebody will misinterpret my behaviour here in Prague as part of the national campaign for the elections. I'm sorry but I didn't have a choice of timing, I decided as I decided."

The leader of the ODS, Vaclav Klaus, says you're a coward.

"Well, it's his statement. I think that to be able to leave is something I can be proud of."