Wilber, Nebraska, is a hub for Czech-Americans, and was appointed 'Czech capital of the USA' by congress back in 1987. Over the 3rd, 4th and 5th of August, it held its annual Czech Days festival, for the 46th time. The town of 1,700 welcomed some 50,000 visitors, and treated them to traditional Czech food, traditional Czech music, and some good old Americana as well. Following on from the celebrations, I called Russ Karpisek, the state senator for Wilber district. Going on the croaky-sound of Senator Karpisek's voice, I asked if there had been a lot of screaming and shouting at the Czech Days festival:

"Yes there was. A lot of fun, and whooping and hollering."

What sorts of things normally happen at this Czech Days festival?

"There are lots of polkas, and fun and dancing. Just everything that you could want to do, there's everything going on."

Mr. Karpisek went on to describe the sort of music that was played throughout the festival in a bit more depth: 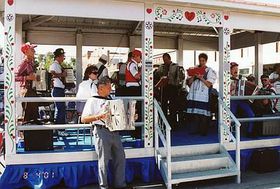 Czech festival in Wilber, photo: www.galenfrysinger.com "Well I'm a member of the alumni band. We march - almost 200 alumni - through the parade every year. And there's also a bunch of bands that play at the Sokol hall, at the hotel beer-garden, they play in all the bars also. There's the Chelewski brothers, there's Russ Skalak."

But the Wilber Czech festival is not just about music. One of the highlights of the weekend is the annual Miss Czech Slovak USA pageant. Nora Jurkovicova was there to represent the Czech Embassy over the weekend. She describes the pageant over a rather shaky line: 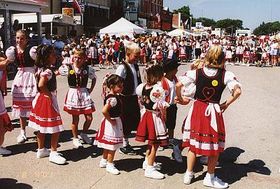 Czech festival in Wilber, photo: www.galenfrysinger.com "The pageant was something extremely unique. I think it is the only ethnic pageant in the United States. There were competitors from 10 states, the state-queens were from all over the United States. They were wearing kroje, or Czech national costumes, and were just beautiful. But of course they had to prove their intelligence, their knowledge, and their knowledge of Czech history as well."

Activities also included a 'duck and dumpling run', a 'tractor tug' and a 'farmyard olympics'. But despite such an action-packed programme, Russ Karpisek insists that it was really very easy to organize: 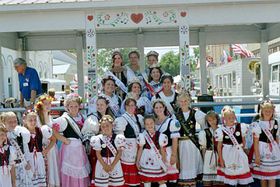 Photo: www.nebraskaczechs.org "I hardly did anything this year, to be honest with you. I didn't do a whole lot. It just kind of happens now, it's been going on for so long, and we have such wonderful volunteers. It just sort of happens. Everybody plays their part and it comes together."

One of the guests of honour at this year's Wilber Czech festival was Nora Jurkovicova. She sat in the back of a vintage convertible and waved at the crowds of people along the route. She was glowing in her praise of Wilber: