Kvitová makes it through to semis at Wimbledon

The Czech tennis player Petra Kvitová unexpectedly reached the semi-finals at Wimbledon on Tuesday, after overcoming Kaia Kanepi of Estonia. The 20-year-old Kvitová – ranked 62nd in the world - had already caused one upset earlier by knocking out fourth seed Caroline Wozniacki. However, in the semi-finals she will face her toughest opponent yet: grass court powerhouse and reigning Wimbledon champion Serena Williams. 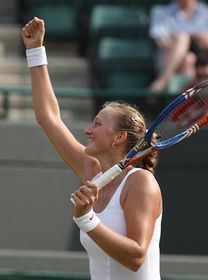 Petra Kvitová, photo: CTK Both times in her previous appearances at Wimbledon, Czech tennis player Petra Kvitová was defeated in the first round: not so in 2010. On Tuesday the 20-year-old player knocked out Kaia Kanepi of Estonia after having saved a remarkable five match points. The final score was 4-6, 7-6 (10-8), 8-6. While the close match was far from flawless, observers noted the Czech player held her cool. Afterwards, here is what Kvitová herself had to say:

“I didn’t exactly play my best, which makes me all the happier I was able to win. I am glad that I am able to win even with shortcomings, for example, if I have problems with my serve. I realised it was the match for the semi-final and when I broke once and then a second time I began to relax and realised I could play my game.” 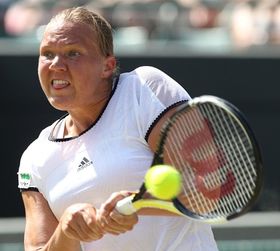 Kaia Kanepi, photo: CTK Her display of mental strength was arguably the difference, says Czech Radio reporter Jiří Hošek, who points out that poor play from Kanepi also played a role in the match. I spoke to him a little earlier on a line to Wimbledon:

“To be quite honest there were plenty of unforced errors from both sides. I think both of the players were really nervous: I think that playing on centre court is something different than playing on court no. 12 or 18! There was a lot at stake: I mean, getting to the Wimbledon semi-finals is something really special and I think that Petra Kvitová played really well at key points.”

Recently men’s player Tomáš Berdych, 24, reached his first Grand Slam semis at the French Open and will play in the men’s quarterfinal on Wednesday at Wimbledon. His performance - together with Kvitová’s success – has led some to suggest that Czech tennis might be enjoying something of a renaissance. But reporter Jiří Hošek is hesitant that such a description would be accurate just yet: 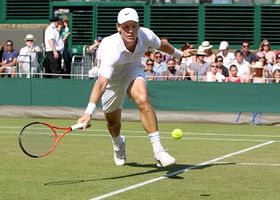 Tomáš Berdych, photo: CTK “I think that it’s too early to tell and to be honest tennis is an individual sport. I mean, it’s a good achievement that nine Czech women made it to the main draw here this year. But just two Czech men did and that is the smallest number in many, many years. Berdych in the quarterfinals and Kvitová in the semis are great results; but what they say about the quality of Czech tennis is a still a big question.”