The country’s Institute for the Study of Totalitarian Regimes on Tuesday launched a new project to commemorate victims of former Czechoslovakia’s communist regime. Called “Last Address”, the idea was inspired by similar initiatives in Russia. Within the project, plaques will be installed at victims’ final addresses – recalling their lives and what they stood for, for which they died. 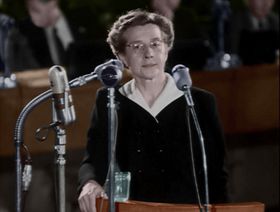 Milada Horáková, foto: Cassius Chaerea, CC BY-SA 3.0 Unported Tuesday is the 67th anniversary of the execution of Milada Horáková a member of parliament and democrat found guilty in a notorious show trial in 1950 staged by Czechoslovakia’s Communist regime. The death penalty was carried out in spite of last minute pleas for clemency from the likes of Albert Einstein and the Pope. The day has seen a number of commemorative events honouring her memory but also that of others who suffered and perished as enemies of the regime. “Last Address” focusses on those who never came back.

Michaela Stoilová, the main organizer of the project at the Institute for the Study of Totalitarian Regimes, told Czech Radio more: 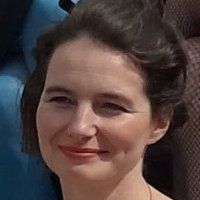 Michaela Stoilová, foto: LinkedIn “The project marks the last address of people who were arrested for political reasons and never returned. That means either people who were sentenced to death or whose deaths were hastened by the regime… It was inspired by an organization called gulag.cz… After a pilot program, we decided to focus primarily on victims of the Czechoslovak regime, as opposed to victims of Soviet repression in general.”

One of four plaques to go up on Tuesday is at the Swedish Embassy in Prague, honouring the memory of Veleslav Wahl, a zoologist executed in 1950. A total of four plaques around Prague have already been approved while a fifth is pending. Michaela Stoilová again: 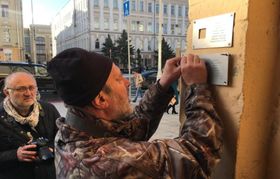 'Last Address' in Moscow, photo: Martin Dorazín' “We were interested in the fate of Veleslav Wahl; as it happens Josef Růžička, the father of his wife who was also a political prisoner, also lived at the address. But that is a coincidence. We highlighted the fact in the materials but the primary focus here is on the on lives destroyed for political reasons. How the information is used, or used comparatively, is up to others to assess.”

If you’d like to see the exact addresses of the plaques which went up on Tuesday, please visit http://www.posledniadresa.cz