In the Czech Republic, smokers, roughly a quarter of the population, burn through 21 billion cigarettes each year; but after last Friday, they are likely to soon no longer be able to smoke in restaurants or pubs. Lawmakers in the lower house of parliament passed a long-awaited anti-smoking bill. 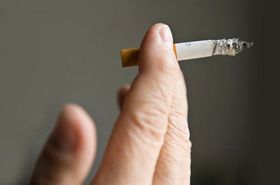 Photo: Filip Jandourek The Czech Republic has long suffered the reputation as being one of the last holdouts in Europe which had not implemented a comprehensive smoking ban, despite the wishes of a majority of the population and even smokers themselves. Last Friday, the country took a major step forward, passing a bill at last.

Protected will be non-smokers, including for example, personnel at restaurants and pubs who were in danger daily from second-hand smoke. The only place consumers will be allowed to smoke in drinking and eating establishments will be in so called předzahrádky or door yards in front of venues.

The new health minister, Miloslav Ludvík, only days in the new post and building on three-year’s work by his predecessor Svatopluk Neměček, admitted before MPs last Friday he was nervous ahead of the vote.

“I stand before for the first time as Health Minister and I have to say that my voice is trembling just a little.”

Not long ago, many politicians, health officials and dedicated anti-smoking campaigners were doubtful a bill such as this would almost “ever” be approved, citing the strong tobacco lobby in the country. On the day, plenty of MPs certainly tied to push through around 70 changes, which would have watered legislation down. The last time it was Civic Democrat MP Marek Benda, who pushed for establishments to have special rooms on the premises for smokers, effectively downing the bill from being approved. This time, a different result: besides smoking no longer being allowed at eating establishments and pubs but also in designated areas at cinemas or sports venues. One aspect which was not approved was a ban on smoking in cars where children are passengers. 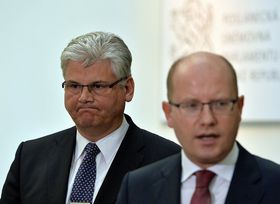 Miloslav Ludvík, Bohuslav Sobotka, photo: CTK Afterwards, the prime minister expressed satisfaction that the bill had passed, calling the approval a signal that the government had been sincere in its effort to protect the health of their citizens in lieu of commercial interests; the health minister added that health protection had finally won over the tobacco producers' lobby.

Some of those who came out againstt or abstained? Communist MP Leo Luzar who slammed the bill is amateurish and TOP 09’s leader Miroslav Kalousek, respectively. The latter stated he had nothing against a smoking ban as such, but suggested he could not vote for this bill in good conscience.

“Under normal circumstances, I would back an anti-smoking bill. But I could not raise my hand for further regulative and repressive measures in the government’s war against entrepreneurs.”

If approved by the Senate and signed by the president (who has said he will not veto the bill), the new legislation will come into law on May 31, 2017 – which, fittingly enough, is World No Tobacco Day. 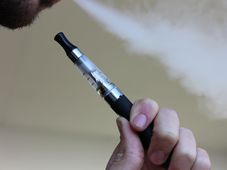