Josef Lesák, a leader of the student resistance to the Communist takeover of Czechoslovakia in 1948, has passed away at the age of 88. Lesák was also the youngest deputy in the country’s parliament when the Communists seized power – and became the first MP they put in prison. 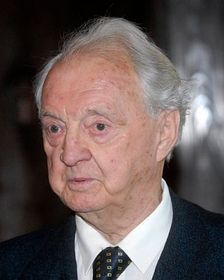 Josef Lesák, photo: CTK In 1946, Josef Lesák, who had fought in the previous year’s Prague Uprising, became the youngest MP in the Czechoslovak parliament. He was in his mid 20s.

Two years later, in February 1948, the Communists, who controlled the interior ministry, were growing in power and the country stood at a cross-roads. On February 20 most of the non-Communist members of the cabinet stood down, expecting President Edvard Beneš to reject their resignations.

Josef Lesák sent the president a telegram beseeching him to hold firm against Communist pressure. In an interview for the project Memory of the Nation over half a century later, he quoted that telegram from memory.

“Mr President, we ask you not to allow anybody to dictate to you who you should appoint to ministerial posts. We trust in you to use your right to name ministers, in the letter and spirit of the constitution.”

Klement Gottwald “When we began to spread out around Hradčanské náměstí a strong unit of the Communists’ National Security Corps lined up in front of the university students, armed with loaded machine guns. Their leader called out, I order you to disperse immediately. I have been empowered to use all means to disperse you. Don’t make me do that.”

The second march, on February 25, only made it as far as Nerudová Street, below the Castle, where it was brutally suppressed. The same day Beneš informed Communist leader Klement Gottwald that he was accepting the ministers’ resignations. A few hours later Gottwald announced to cheering crowds that his party was now in power.

Not long afterwards Josef Lesák became the first MP imprisoned by the Communists, for “anti-state activities”. When he was released after one year he was sent to the Zápotocký coal mine in Kladno, where he was to spend a long 29 years.

Following the Velvet Revolution Lesák returned to politics, becoming a member of the Czech National Council for the Czechoslovak Socialist Party. He was also a leading member of the Milada Horáková Club, which honoured the memory of his old friend and party colleague, executed by the Communists in 1950.

Last year Josef Lesák received a high state honour, the Order of T.G. Masaryk, for his contribution to the development of democracy and human rights.