Lenka Šmídová, the first Czech to win an Olympic medal in sailing, and her preparations for Beijing 2008

Lenka Šmídová became the first Czech ever to win an Olympic medal in sailing, taking a silver medal in Athens four years ago. This time around, however, even qualifying to compete in the Olympic Games in Beijing has been tough. A change of category and numerous combinations of sailing partners along the way have meant her route to the games in China has been less than straightforward. I spoke to Lenka Šmídová at the Czech Yacht Club in Prague as she prepares to leave for China later this month. 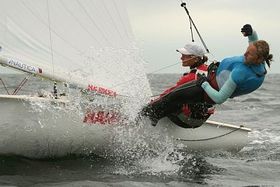 Photo: www.lenkasmidova.cz "It has been a lot more difficult for me than last time around, since I have changed my class and my crew in the last three years. I have sailed with three different girls. I only began sailing with my latest and current partner Lenka Mrzilkova four months before the final trials. So it was very difficult to get used to each other and to get fast enough and good enough to qualify. But we did so we're very happy and looking forward to heading off to the Olympics."

So you feel happy together now, a good team going off to China together?

"Well, we are as good as can be expected after only a year sailing together. Most of the competition we will face there and the crews we will be sailing against have been together for a lot longer, for many years. We will be the youngest team there and I hope that this won't prove to be a disadvantage." 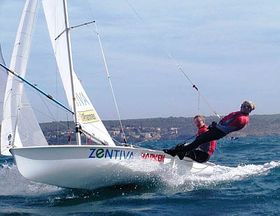 Photo: www.lenkasmidova.cz With this in mind, what sort of expectations will you be carrying with you into the Olympics?

"Considering that we were the last team to qualify, we would like to make it into the medal round containing the last ten boats. After that we will see what we can do from there. The new points system for the Olympics involves you being awarded double points in the medal round, so there can be a lot of position changes in this race. Once we make it there we will have to see if we can make it into the medal positions come the end."

Why did you change categories from last time round, was it because of a change in the rules and the system, or for personal reasons and preferences?

"Well, the class I was in before Europe dinghy, was representing the single handed discipline. This was removed and changed to be replaced by the laser radial class. I didn't like it very much. I tried to sail Laser Radial for a month and I didn't like it, it did nothing for me. It was a step back for me, so that's why I decided to change class and take on a new challenge."

Finally, where have you been doing all your training and preparing for the Olympics?

"All around the world. The first winters we spent in Florida, we then did all the European circuit, the cup regattas in Europe. Last winter we were in Australia. Really it depends on where the competition is and where everyone goes because you want to be training against the best teams so we were just about everywhere!" 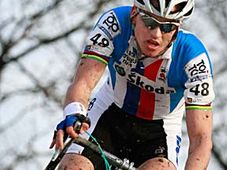 In Sports News this week: Zdeněk Štybar finishes second in the Cyclo-cross World Championships in Italy; Milan Baroš is hoping a move… 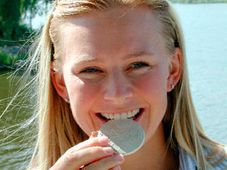 Lenka Smidova made a little bit of history recently, when she took the Czech Republic's first ever Olympic medal in sailing, a silver… 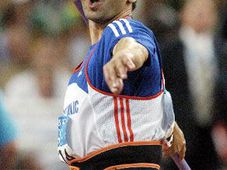 In Sports News: the closing weekend of the Athens Olympics was disappointing for the Czech Republic, with Jan Zelezny finishing ninth…