Czech Radio is on Friday marking the 95th anniversary of the station’s first ever broadcast from a military airfield in Prague. The public will be able to join in celebrations the following day in the form of an open day and a free concert at a nearby park. 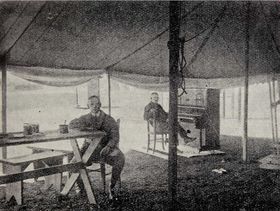 Czechoslovak Radio tent at Kbely air base, photo: archive of Czech Radio A historic moment occurred at 20:15 on Saturday May 18, 1923 when the first ever broadcast by Czechoslovak Radio was made from a tent at a military air base in Prague’s Kbely district.

After the United Kingdom, Czechoslovakia was the second country in Europe to launch regular radio broadcasting.

Zuzana Foglarová is communications manager at today’s Czech Radio. Speaking at a new exhibition of radio technology at the station, she describes the scene in May 1923.

“Above all it was very simple. There was one tent, which had been borrowed from the scouts. On the floor in the tent was a piano and stool. There was also a table for the presenter, technicians and so on. There was only one microphone, and the story goes that if somebody was playing the piano and somebody else was singing, the latter had to sit under the piano so the microphone could pick up all the sounds.”

Many of the first listeners 95 years ago were waiting to hear the signal come through at a cinema just off Prague’s Wenceslas Square.

Indeed, it was some time before a significant number of people had any way of catching broadcasts, as Zuzana Foglarová explains.

“At first there weren’t radio receivers, so the reach was really tiny. At the Sanssouci cinema there was a public radio receiver and people gathered there to listen. They couldn’t believe that the wireless transmission of sound was possible. And acquiring a receiver was very difficult. You had to submit a statement including your address and proof you didn’t have a criminal record. It took ages and when you did get a license it specified the type of receiver you could use.” 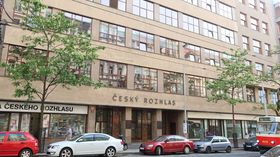 Czech Radio building at Vinohradská St., Prague, photo: Lenka Žižková Cut to the present day and Czech Radio has a plethora of stations, including Radio Prague (which began broadcasts in 1936), and offers audio both live across the airwaves and via a number of other platforms.

Visitors can get a glimpse behind the scenes at an open day running at the main Czech Radio complex in Vinohrady from 9 am to 6 pm this Saturday. In the nearby park Riegrovy Sady there will also be a free pop concert celebrating 95 years of Czech Radio from 11 am to 10 pm.

The above referred to exhibition of radio technology runs at the station’s Vinohradská St. entrance every Thursday afternoon until the end of July.