Locals in a protected villa district in Prague’s Vinohrady were shocked as one of the houses, an art deco building from 1921, started being torn down on Friday. The local mayor immediately halted the demolition and is pursuing legal measures to protect the villa. 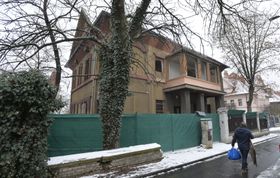 Photo: ČTK/Michaela Říhová It is not the first case of an historic building being torn down in the Czech capital. While the art deco villa itself is not a listed building, it lies within a protected zone of villas in the south of Vinohrady known as “Svépomoc“.

“It is a shame because it is a house that was designed by the important Czech architect of the interwar era František Libra and it is a part of the colony of buildings that he designed in the art deco style.”

The owner of the property is AWM Bohemia CZ. Since February 2017 the company has had permission to implement gradual adjustments to the building, but not its destruction.

According to mayor of Prague 10 Renata Chmelová, the company said it had discovered cracks as well as critical damage to the building’s roof. However, when she spoke to the building manager, he failed to come up with any evidence.

“Personally I did not see any rotten roof. The cut up pieces of wood were completely healthy. When I asked him to prove it to me through some sort of documentation, he showed me some photograph of a rotten piece of wood, completely out of the building’s context, a completely irrelevant piece of evidence.”

Mrs. Chmelová and her team are now pursuing legal action against the owner. This could force it to restore the building to its original state and pay a fine.

However, some have highlighted that current fines, which can go up to CZK 2 million, are not high enough to stop owners demolishing run-down houses in lucrative areas. 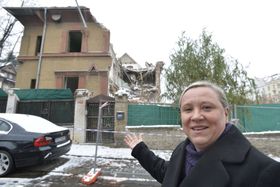 Renata Chmelová, photo: ČTK/Michaela Říhová Mrs. Chmelová, who is also a senator, says she will be pursuing a change to legislation which will crack down harder on rogue owners.

“There are a lot of cases like this. For example, I remember when Blanka Matragi’s villa was demolished and, if I recall correctly, the owner ended up just getting a CZK 200 000 fine.

“I want to make this case into a precedent that forces owners to realise they can’t use such methods if they own a building in a protected zone.”

Architect Zdeněk Lukeš says that, above all, the destruction of unique historic properties is not in the long-term interest of the owners themselves.

“I think it is especially important to appeal to the owners that these are buildings of good quality whose worth will grow with time and it is therefore in their own interest to repair these buildings and not destroy them.” 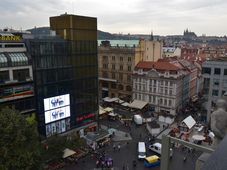 A modern building ends the last row of houses at the bottom of Wenceslas Square. This is the ‘Euro Palace’ which neighbours two important…