Fifteen buildings were just recently added to the list of Czech Cultural Monuments, including an early 20th century power station in Poděbrady and Prague’s famous Lucerna Palace. The list also includes buildings from earlier periods, such as the Invalidovna complex, which featured prominently in Miloš Forman’s Amadeus. 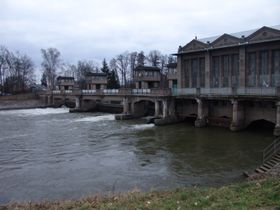 “About two-thirds of the nominated sites are from the first half of the 20th century and this is a period which was largely ignored before.”

If I am not mistaken, at least one of the sites to receive the new designation featured in documentary series on architecture, “Šumná města”, there is the site in Poděbrady, for example.

“Many are very important examples of modern architecture including a dam and power station in Poděbrady, which was designed by Antonín Engel, who was a famous Prague architect who was the creator of the urban plan for the Dejvice district in Prague 6, including Victory square. As a young man, he was a student of Viennese architect Otto Wagner and in the power station, bridge and dam goes back to this period, to 1910.” Palác Lucerna, photo: Štěpánka Budková In Prague, one of the most notable sites added to the list is Palác Lucerna…

“Palác Lucerna was included, without question, for its enormous cultural significance. It dates back to the beginning of the 20th century and was one of the first multi-purpose buildings in Prague. It covered many different functions all in one: it introduced a large hall for concerts where later jazz greats like Louis Armstrong performed.

“There was a very popular cinema, passageways for luxurious shops, a famous café, and of course it was by Václav Havel, the famous builder and grandfather of Czechoslovakia’s future president, former dissident and playwright Václav Havel. Parts of Lucerna may also have been designed by architect Osvald Polívka, one of the leading art nouveau architects in that period.” Invalidovna, photo: Sophie Eberhardt What are some details which visitors should look out for?

Final question: what changes for sites that are added to the list? Is it a benefit?

“Generally-speaking, yes. It can help bring in funds for further renovation, for example, and international interest. On the other hand, the care or the upkeep of such sites must be of the highest order and can spell trouble for some owners. Mostly, I hope it is a help.”