A mass public drum session to remember the first Jewish transports from Prague on 16 October, 1941 was held in the Czech capital on Friday. The event took place at the former Bubny railway station, from which around 50,000 people were sent to their deaths. Called Drumming for Bubny, it was organised by the Memorial of Silence and DOX Centre for Contemporary Art. 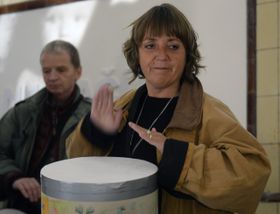 Leoš Válka, actress Bára Hrzánová, photo: CTK Just before it took place, Ruth Fraňková spoke to Leoš Válka, the founder of DOX, who said the title plays on the fact that Bubny means “drums” in Czech:

“The drum was used historically for public calls and public meetings and in the armies so we think it is very appropriate for attracting the attention of the passers-by and of the public.

“But it is also a symbolic expression of our call against the silence of majority which we believe was an indisputable part of what was happening in Czechoslovakia and other countries affected by Fascism.

“There was a general public which tolerated things happening around them without any protest in a way. So it is the silent majority which is a target of our attention. We shouldn’t be silent when dramatic things are happening around us.”

And I guess this is also relevant to what is happening nowadays in Europe. Photo: CTK “Absolutely. It is not only about the historical Holocaust with all its implication, what is also important is the psychological aspect. These situations can happen again and are happening in a different context. We are now witnessing massive problems and we all have to take a stand.

You told me you wanted to attract the attention of the public, so I guess anyone can come and join in the drumming.

“It is meant to be for the public. We want to attract everybody’s attention and hopefully we will start a tradition. We hope to repeat it every year in the same day with the increasing number of drummers, professionals and non-professionals, and hopefully it is going to be the largest assembly of drummers in Europe.”

The event also wants to raise awareness and funding for the memorial of Silence in Prague and the event will also launch an exhibition called A Fragment of the Memorial of Silence. Can you tell me more about it?

“This exhibition is called Fragments, so it is really a fragment of the future programmes which we hope to organise inside the building of the railway station after it is rebuilt and converted into the Memorial of Silence. 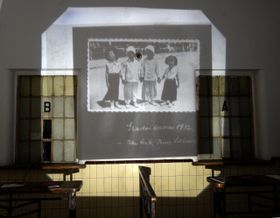 Fragments, photo: CTK Finally Prague’s Drumming for Bubny was preceded by an event at the Czech Embassy in Washington, attended by Madeleine Albright. Will there be any special guests in Prague today?

“Well, there will be ambassadors from different embassies and figures from the Czech cultural life but the main reason is to get a unified voice of the public. So if there are any important people mixed in a crowd, they are not going to receive any special treatment.”