The Czech writer Milan Kundera is regarded as something of a modern-day national treasure – despite the fact that he has lived outside of the Czech Republic for decades. But the author of such books as The Unbearable Lightness of Being and The Joke has now been accused of reporting a young soldier to the communist authorities – something that led the man involved to be imprisoned. 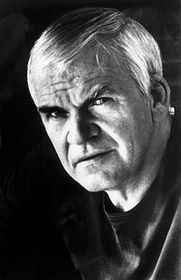 Milan Kundera, photo: CTK In a society in which at least some form of passive collaboration was required to survive, the ghosts of the communist past in Czechoslovakia are often stirred from their quiet sleep by reports or long-lost documents or even whispers. A few years ago, the noted Czech folk-singer Jaromír Nohavica stood accused of collaborating with the notorious StB – the communist-era state security services. Critics say that till this day, he has not given a proper and full answer about just what he did. The resulting backlash has undoubtedly damaged the singer’s standing.

Now, another Czech icon stands accused of essentially the same deed. This time, it is Milan Kundera, a man who was even more opposed to the communist regime than Nohavica; a man who after facing expulsion from his place of work; the banning of his books and blacklisting by the authorities, finally fled the country in 1975 and settled in France.

Miroslav Dvořáček, photo: ABS Archives On Sunday, Czech Television reported that in 1950, aged 21, Milan Kundera had reported a soldier by the name of Miroslav Dvořáček to the secret police. The reason was that Kundera knew that the man had worked for western intelligence previously and was thus likely a spy returned to Czechoslovakia to gather information. The news comes as a long study has been completed into the matter by a noted Czech historian from the Institute for the Study of Totalitarian Regimes – the documentation, found by accident, is seemingly irrefutable: Mr Kundera went to a police station and turned the soldier in, knowing full well the man could face the death sentence for treason. Worse still, Mr Miroslav Dvořáček, who now lives in Sweden, did not know who had informed on him, and had in fact wrongfully felt that a female friend was the one responsible. The man escaped the death sentence, but before his release from jail in 1963, was also sent to the notorious uranium mines. 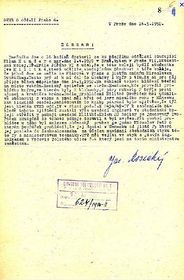 The testimony of Milan Kundera, photo: ABS Archives I spoke with former dissident Jan Urban about the matter and began by asking him how serious he thought these changes were:

“Very serious. The accusations are very well documented and the results of two years of work by a professional historian digging through archives. So I think that this is new and very serious information that we have in our hands.”

And will this damage Kundera’s reputation?

“It definitely reveals a very dark history of one day of his life. He was 21 when he voluntarily visited the police and informed on what he felt was a western imperialist spy entering Czechoslovakia illegally, and he felt it was his obligation to report that to the police.”

Yet this news reveals a darker undercurrent in Czech society, dismissive of redemption and one which highlights the extremes of either keeping quiet or risking all. Jan Urban also believes that this explains why Milan Kundera, still living in France, has kept the Czech Republic at arm’s length even after the Velvet Revolution:

“The problem with Czech society is that we are still filled with the communist belief that we are in a black-and-white world. We cannot accept that people make mistakes and if they apologize, they should be pardoned. It is also part of the explanation why Milan Kundera has been hiding from his readers, his country and his friends from more than forty years. He’s one of the greatest writers of today – if he could just say ‘yes, I made a mistake being 21years-old and probably someone paid for that mistake instead of me…’ he could even make a great book out of that. Instead, he has pretended that nothing happened, and I think that that is a mistake.”