As of this year, Czech teachers and ministry officials should only use politically correct language. The Ministry of Education has sent out a language guide to all of the Czech Republic’s schools and ministries, giving advice on how to avoid sexist language and how to speak correctly in terms of gender. I spoke to Pavla Paclíková, one of the authors of the guide, who says Czech is still full of politically incorrect language.

“It is almost everywhere: in newspaper, magazines, TV programmes, e-mail communication. Women are often invisible in the language, which is due to the use of generic masculine nouns and pronouns. They are often portrayed in language as subordinate to men. Their activities and occupations are often trivialised in language. For example ‘girls in the office’ - ‘ženský v kanceláři’, or ‘to dokáže i ženská’ – even a housewife can do that, or the generic masculine ‘vědci’ – scientists, which is gender neutral in English. In Czech we have to use both genders.”

On the other hand, there are words that only have a female or male variety, such as gender specific job titles. Is it really necessary to introduce new terms in the language?

“We cannot say that we only have one term; we simply don’t use the female form. That’s the problem. With the word ‘vědci’ – scientists, we often refer to both men and women. But of course we have the female form ‘vědkyně’, we just don’t use it. That’s why people think that some job titles have no female form.”

Women themselves often use masculine terms when referring to their profession. Why is that?

“I think it’s a tradition. Women often think that it is more prestigious to call themselves for instance ‘soudce’ – judge instead of ‘soudkyně’. I think it’s a problem of thinking. Some people are more critical but many people still think that it isn’t necessary to pay attention to this issue.”

Why is it important to use politically correct language?

“I would say that language both shapes and reflects social reality and it is quite important to use non-discriminatory and non sexist language. If women and men are equal we should use language that treats both genders equally.” 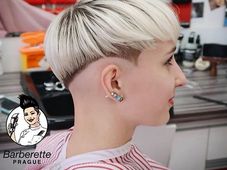 Klára Váňová is the owner of Barberette, Prague’s first gender-neutral barber shop. Its philosophy is that all customers, regardless…