The Ministry of Justice announced on Friday that it has started using the long awaited ankle bracelet system which will provide better monitoring of prisoners under house arrest. This should result in more frequent use of the house arrest concept and even free up more spaces in overcrowded prisons. 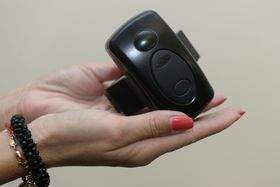 Czech prison cells are currently holding nearly 22,000 inmates and are operating three percent over their maximum capacity. Overfilled prisons have long been an issue of public attention, even being used as a reason for the controversial wide-reaching amnesty proclaimed in 2013 by then president Václav Klaus, which saw the release of over 111,000 prisoners.

A law introducing the penalty of house arrest, for minor offences and prison sentences of less than 5 years behind bars, was already passed in 2010. However, until now, the prisoners have only been monitored by personal visits from the probation officer.

Now the house arrest system is to become more efficient through ankle bracelets, whose introduction had been held back by a long tender process, where initial price estimates ranged as high as two billion crowns.

Speaking at a press conference on Friday, Justice Minister Jan Kněžínek said that the bracelet has just been put into use at a significantly lower cost.

“Currently about 50 convicts are wearing the bracelet and number will increase slightly by the end of the day. We expect that the number of convicts using this system will gradually increase to 2,500 in the coming years, which, would result in a total cost of CZK 93 million after six years of use. This is a diametric difference to the original quoted prices, especially compared to the first tender.”

Standing alongside the minister, the director of the Czech Probation and Mediation Service, Andrea Matoušková, warned that the ankle bracelets should not be seen as a panacea for solving the crisis of overfilled prisons, but praised its reliability as a monitoring device for her department. 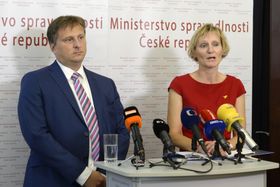 Jan Kněžínek, Andrea Matoušková, photo: ČTK/Kateřina Šulová Apart from the ankle bracelet the device also includes a box that serves as a base station informing whether the prisoner is at home and a phone through which probation officers can communicate with the ankle device wearing individual.

Milan Dolejší, who works for the Probation and Mediation Service, said that the device also comes with an optional alcohol tester.

“We are prepared for this option as well. This mobile ‘alcotester’ works with the communication device. It also checks some biometric data to make sure the person is the convict. The result is then immediately visible in the system.”

The supplier of the bracelets is Israeli technology company, SuperCom, from which the government has currently ordered 280 of the devices for CZK 15.6 million.