Mixed emotions as smoking stubbed out in Czech pubs and restaurants

On Tuesday night, smokers in pubs and restaurants around the Czech Republic enjoyed their very last cigarette. On May 31, observed around the world as anti-tobacco day, tough anti-smoking legislation which took years to push through finally came into effect, banning smoking in bars and restaurants as well as public places such as theatres and cinemas. So what do Czech pub owners think of the new legislation? 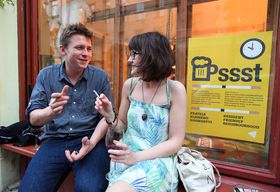 Photo: CTK As of Wednesday, the Czech Republic joined 22 other countries in Europe, which have a wide-ranging ban on smoking. Individuals who break the law can be punished by fines of up to 5,000 crowns, while businesses will be given a 90-day period to adapt. Later they could face fines of up to two million crowns and a two year-long ban on doing business.

On Tuesday night, a small pub bordering Prague’s district of Nusle, mostly frequented by beer drinkers, was filled with thick cigarette smoke. The owner complained that the new legislation would definitely turn away many of her customers and expressed fears she may be forced to close down her business:

“We are a pub and most of our customers want to have a cigarette with their beer. There are only about five percent of non-smokers. Many people have already told me that they will stop coming. At the moment, they can at least sit in the garden, because it’s warm outside. I think I will lose about 50 percent of my income, which is really liquidating for me.” 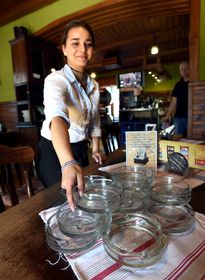 Photo: CTK These concerns are shared by many other small pub owners around the country, whose customers mainly include beer drinkers and smokers.

For the legendary Prague pub U Pinkasů, which is largely frequented by tourists, the anti-smoking ban is unlikely to bring any significant change. The pub’s manager, Karel Doubek, says it has been a long-time trend.

“Some ten or twelve years ago our clients could smoke anywhere, but it is because of them that we gradually turned three quarters of our restaurant into a non-smoking area. Our society has been gradually preparing for this change, and in the meantime, smoking bans were enforced elsewhere in Europe, so I think it is not going to be dramatic. Our place is so busy that even if we lose some clients, we won’t really feel it.”

Despite many pub owners actually admitting that their business is unlikely to be affected by the anti-smoking law, many still regard it as unnecessary, arguing that people should have the right to choose, such as a waiter employed in another Prague restaurant, Bernard: Photo: CTK “I don’t think we’ll lose clients. The ban will take effect everywhere, giving them no other choice. But I still think it doesn’t make sense. We already have a non-smoking area in our restaurant. I think it makes no sense and I don’t see the point of banning smoking completely. What’s more, people will go outside, where they will make noise and a mess.”

Cigarette butts and noise in the streets outside pubs and restaurants is a common side effect of anti-smoking bans and authorities in the country’s larger towns and cities will eventually have to come up with measures to tackle the problem.

Cigarette consumption in the Czech Republic dropped by more than 60 million over the past year, Czech Radio reported on Tuesday, citing…