Twenty-three EU member states, including the Czech Republic, have signed up to a European pact on defence cooperation called Pesco (Permanent Structured Cooperation). The deal, to be formally launched in December, is likely to cover everything from troops and arms to new defence projects, with varying input from different countries. 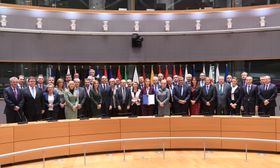 EU foreign policy chief Federica Mogherini, center, poses with EU foreign and defense ministers after signing the notification on Permanent Structure Cooperation (PESCO), Brussels, November 13, 2017, photo: CTK I discussed some of the reasons why the pact has moved forward, and where things stand at the moment, with political analyst Jiří Pehe.

“I think that right now it is still mostly a symbolic move which will need much more work to become a reality. But the fact that 23 countries so far have signed on is an important step because it shows how the European Union could develop in other areas as well. We hear a lot about a two-speed Europe and even here, it seems to me, there will be a lot of projects now on which many countries will choose to cooperate, others will be left out, and on some level some will move towards higher integration.”

Of course there are many different factors which are said to have hastened this decision, aren’t there, the Trump presidency being one…

“Even if Mr Trump or the future of NATO were not mentioned explicitly in deciding about closer cooperation about security issues in Europe, I think they are clearly in the background because we cannot be sure Donald Trump won’t change his mind again about NATO. Then you have the fact that Great Britain, an important member of NATO, is leaving the EU, so that means that there will be less overlap between NATO and a possible EU defence project.”

What do you think at this point will be the more likely outcome about the shape the project might take?

“Cooperation can be discussed in a number of areas and initially it will be important just to identify those. Eventually, though, we could see the creation of some joint-command structures and a real European army and so on. It would also be economically important because it would mean that Europe would have to develop its own armaments industry.

“As long as the discussion remains on the level of contributing what the Czechs already have, than I think the Czechs will go along. But of course it moves towards increasing financial contributions to this project than of course we could some hesitance on the part of some countries, including the Czech Republic.”