January marks two important anniversaries. It's 30 years since the release of the Charter 77 human rights declaration, and also the 30th anniversary of the so-called "anti-Charter"- the response of the communist regime. Thousands of artists, musicians and writers signed a petition dismissing the Charter 77 signatories as "drop-outs" and "traitors". So many signed - so how do they feel thirty years on?

Charter 77 was an attempt to show that Czechoslovakia's communist regime was failing to respect fundamental human rights. The regime's response - later dubbed the "anti-Charter" - was an attempt to isolate and discredit the tiny group of dissidents who had created Charter 77.

The authorities gathered thousands of signatures, including that of Michal Prokop, a well-known rock musician. Michal Prokop knew several of the Charter 77 signatories personally - he was friends with actor Pavel Landovsky and had also met Vaclav Havel. But as he told Radio Prague by telephone, he didn't pay too much attention to what he was signing.

"As musicians who worked for an agency we were always being sent to various meetings where someone would lecture us about something or other - we saw them as a necessary evil. Sometimes we went because we were being watched and had to go, otherwise they wouldn't have let us carry on playing. So when this thing happened I just took it as another boring meeting. I had no idea we were going to be asked to sign something which would become so important." 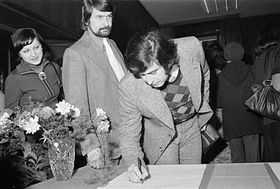 Michal Prokop signing the 'anti-Charter', photo: CTK The official anti-Charter campaign culminated at the end of January with televised meetings at Prague's National Theatre and the Theatre of Music, where hundreds of figures from Czechoslovakia's cultural scene publicly denounced Charter 77. They included Jan Werich, one of the country's best loved actors, and Karel Gott, Czechoslovakia's most successful pop star. Over the following days, the Communist Party newspaper, Rude Pravo, published the signatures of some 9,000 people. The moment he saw the footage on TV, says Michal Prokop, just what he had done began to sink in.

"It wasn't until later that evening when I saw it on TV, when I saw exactly what it was I had signed and how it was being used...that I realised for the first time what a terrible thing I'd done. I have to admit I'm still ashamed of it to this day. When me and some of my friends watched it on TV that evening - and some of them are now very well-known people in the music business - well...some of the women burst into tears. It certainly wasn't a very pleasant feeling I can tell you."

Michal Prokop says he's still troubled by his ignorance and naivety all those years ago. But he also hopes that what he's done since 1989 - he was an MP in the 1990s - has gone some way at least to making up for the mistakes of the past.

"It wasn't until 1989 - when I started signing those petitions for the release of Vaclav Havel, when I managed to find the courage inside myself, and when the regime collapsed, in a matter of days - that I suddenly realised that all along the worst thing had been the sense of fear. It was the kind of fear that made people do things that they probably didn't have to do. But they did them because they thought there was no other choice." The rock and blues singer and song writer Michal Prokop has been part of the Czech music scene for over 50 years. With their clever…

The rock and blues singer and song writer Michal Prokop has been part of the Czech music scene for over 50 years. With their clever…