Ice hockey's Stanley Cup playoffs have been underway since early April with results leaving many Czech fans plenty to cheer about. Jaromir Jagr's New York Rangers, for instance, as well as Dominik Hasek's Red Wings have so far seen success. But in the Czech Republic the NHL playoffs aren't the only tournament worth watching: this Friday the Ice Hockey World Championship gets underway in Moscow and understandably many eyes will be on the Czech team. 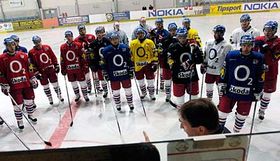 Photo: CTK Since 1996 the Czech national team has won the Ice Hockey World Championship a total of five times - the last with former captain Jaromir Jagr in 2005. But even last year the team didn't fare badly, somewhat surprisingly making the final against Sweden despite a fair amount of fresh-faces and inexperience. While the Czechs lost 4:0, the silver was still greeted as a welcome success. This year the Czechs will once again try give the other teams a run for their money; the team's captain, David Vyborny:

"We've got a bunch of experienced players here in Europe who have got a lot of games under their belts. If others don't come over [from the NHL] that's their decision. As for our goalies, they're all experienced. Hopefully our forwards too have saved their goals for the tournament. I think we've got a good team." 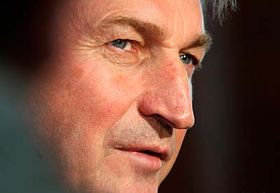 Alois Hadamczik, photo: CTK Originally it was thought the Czechs would benefit more from NHL players coming over but many have either declined or been unreachable, like the Calgary Flames' Roman Hamrlik. Still others remain in action in the Stanley Cup playoffs, while some have been hit by injury, like forward Martin Erat. Team coach Alois Hadamczik:

"I spoke with Martin Erat yesterday and we spoke at length. He's really excited about playing but he's still got a knee injury. I promised to give him a week off, that he wouldn't have to play in the tournament's first few games. He's doing all he can to join us." Photo: CTK In their opening game the Czechs will play Belarus, and after that, Austria. The most demanding match in their group is therefore likely to come against the US. Later they could then face tougher teams like Canada or Slovakia.

In the tournament this year the Czechs will not only be relying on newer players but also old-hands like Vyborny or Cajanek, as well as this year's starting goalie Roman Cechmanek. At 36, he's perhaps not as formidable a goaltender as he used to be but has a brash and confident playing style that Czech fans hope will help intimidate opponents. 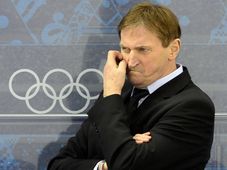 The Czech national hockey team is now officially looking for a new coach. On Monday, a day after the Winter Olympics ended, Alois Hadamczik… 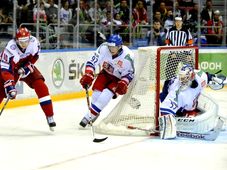 In Sports news this Monday: Czech national hockey team shines in test for the Olympic Games; Jaromír Jágr moves up the NHL’s all time… 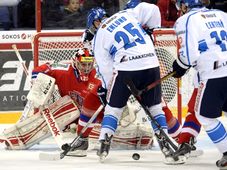