Two massive wooden boxes, each weighing over 300 kilograms – that was what the botanist and pharmacologist Bohuslav Jiruš left the National Museum in his will some 100 years ago. The humungous mystery crates came with one instruction: They should not be opened until 200 years after Jiruš’s death –the year 2101. Now, the National Museum has published the surprising result of its vote on whether its researchers should be allowed to take a peak inside with computed tomography. 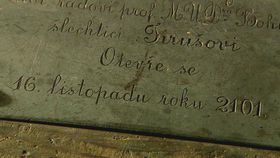 The inscription on one of the boxes, photo: Czech Television In 1901, Bohuslav Jiruš left the National Museum two huge wooden crates with the instruction to not open them until 200 years after his death. He could not have anticipated that before then, technology should advance to the point that a look inside the boxes would not even require opening them. The mysterious boxes are tempting the curiosity of researchers and the public alike but is taking a look inside them with computed tomography a breach of what Bohuslav Jiruš asked for in his will? The National Museum put this ethical dilemma to the vote. The surprising result of the one-month poll was published on Tuesday. Martin Sekera is the head of the National Museum’s library.

“53 percent were against opening or scanning the boxes, and 47 were in favor of scanning them. The public expressed the opinion that the wish in Jiruš’s will should be respected, even if at the time of his death, he could not have anticipated that something like computed tomography would exist. And as an institution, we were glad that the public thought that was unethical.” 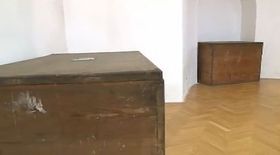 Photo: Czech Television Some 3000 people participated and shared often very emotional opinions on the museum’s webpage. Now, museum researchers have formed a special team to find out more about the content of the mysterious boxes through other methods. Due to their weight, it is fairly certain that they contain heavy objects, says Mr. Sekera, most likely from copper. Given that Bohuslav Jiruš was a scientist, it is safe to say that any degradable objects in the crates would have been conserved in some way. And the special mystery box research team has come up with yet another way of solving the curious case of the heavy crates.

“We thought that another good way of researching the contents would be through our archive. We will go through our archive, even elements that are not directly connected to Bohuslav Jiruš, so that we can rule out that it may hold some information on the content. An archive is a very complex organism, and sometimes, things can be filed incorrectly. Our team will be searching archive materials and maybe we will randomly discover something that sheds light on the content of these mysterious boxes.” 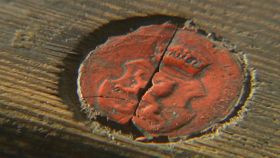 The seal on one of the boxes, photo: Czech Television The results of this search through the archives will be announced next week, on May 10th. And unless a new generation of museum researchers decides to disrespect the poll, the public won’t be able to take an actual look inside the boxes until 89 years from now.