NATO’s Secretary General Anders Fogh Rasmussen is in the Czech Republic for a two-day visit, primarily to drum up support for a heightened Czech military presence in Afghanistan. On Friday, Mr Rasmuseen met with the Czech Prime Minister Jan Fischer, whose government has already approved an increase of Czech troops in the war-ridden country. But the decision has yet to be sanctioned by the Czech Parliament, and NATO’s Secretary General is later scheduled to meet with party leaders to try to win their support for the plan. 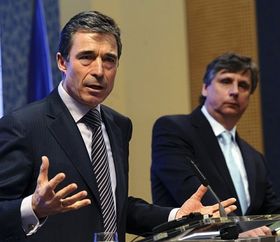 Anders Fogh Rasmussen, Jan Fischer (right), photo: CTK “Let me express my strong appreciation of the significant Czech contributions to NATO operations and missions. You have contributed significantly to our mission in Kosovo; you contribute in a valuable way to our operation in Afghanistan; your provincial reconstruction team in Logar serves as a good example of how we can combine civilian reconstruction and security.”

The Czech Republic currently has over 460 soldiers deployed in Afghanistan. In January, a Czech helicopter unit arrived in the country’s Paktika province. Czech expertise in this field is highly valued and Czechs have offered to participate in a major NATO project of modernizing Bulgarian and Romanian helicopters. NATO chief Anders Fogh Rasmussen said this could be a model for other types of future cooperation.

“The Czech Republic has taken the lead in a helicopter initiative where a number of countries pool their resources with the aim of making our helicopter capacity more efficient. This initiative could serve as a good example for similar projects in other areas within our alliance.”

But the main goal of Mr Rasmussen’s visit to Prague is to ensure that the Czech Republic sends additional training staff to train Afghan security forces. The Czech government has already approved an increase by 55 soldiers. The move has yet to be approved by the Czech Parliament. But last month, the lower house’s defence committee rejected the motion. NATO’s secretary general Anders Fogh Rasmussen is therefore also meeting with the leaders of the country’s strongest political parties to try and convince them of the need to support the plan.

“I would expect to gain broad support in the Czech population as well as among Czech politicians that the ultimate goal should be to hand over the ultimate responsibility to the Afghans as well. We will not stay in Afghanistan forever; we will stay as long as it takes to finish our job. And that means making the Afghans capable of taking the responsibility themselves.”